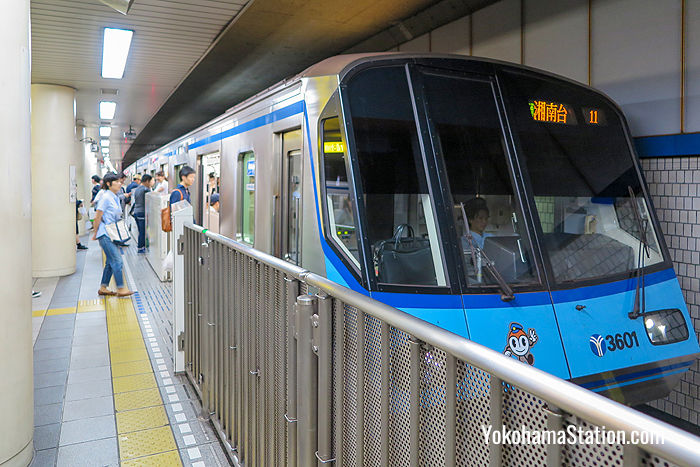 A Blue Line train bound for Shonandai at Shin-Yokohama Station

There are 13 stations between Yokohama and Azamino stations.

The Blue Line’s key northbound destinations are listed below with locations of interest and transfer points. Example fares and journey times are given from Yokohama Station. 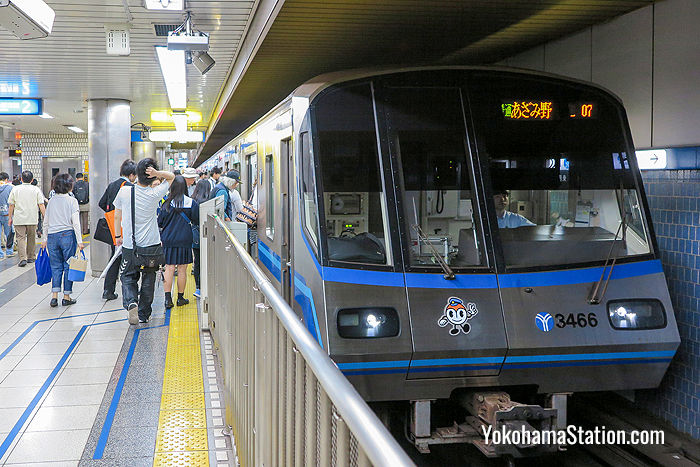 A train bound for Azamino at Yokohama Station

Yokohama Station is a major transportation hub with a variety of department stores and shopping centers both in and around the station building. These include Takashimaya, Lumine, Porta, and Yodobashi Camera. The top attraction near Yokohama Station is the Hara Model Railway Museum which exhibits a huge collection of working model trains.

Transfers can be made here to JR East’s Yokosuka Line, Shonan-Shinjuku Line, Negishi Line, and Tokaido Line; the Tokyu Toyoko Line, the Keikyu Main Line, the Sotetsu Main Line and the Minatomirai Line. Local and highway bus services depart from Yokohama City Air Terminal (YCAT) which can be found on the 1st floor of Yokohama Sky Building on the east side of the station. 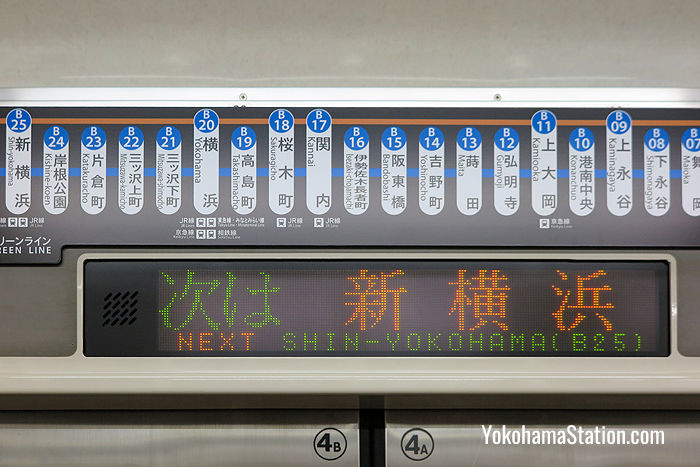 An on-board information screen with both English and Japanese

The Shin-Yokohama Ramen Museum is a popular attraction near this station. This museum features a recreated Tokyo downtown district of the year 1958 with a food court of noodle shops selling ramen varieties from all over Japan. This station is also convenient for both International Stadium Yokohama (also called the Nissan Stadium) and Yokohama Arena.

Shin-Yokohama Station is the shinkansen terminal for Yokohama City with Tokaido Shinkansen services bound for Tokyo or for Nagoya, Kyoto, Osaka, and Fukuoka. Transfers can also be made here to the JR Yokohama Line.

The area around Center-Minami Station has many parks and much greenery including Chigasaki Castle Ruins Park which is a pleasant green space on the former castle site. Six minutes’ walk from the station is a small but charming temple called Shokakuji which has very pretty seasonal flower displays.

Exit here for Yokohama History Museum, a local history museum with exhibits ranging from prehistoric times to the present day. Currently closed for repairs, the Yokohama History Museum will reopen in April 2020. Also nearby is the Otsuka/Saikachido Relics Park which is an open archaeological site where you can view the remains of ancient burial grounds, a moat, and pit dwellings. The park also includes Tsuzuki Minka-en; a reconstructed private residence of the Edo period (1603 – 1868) which includes a main house, stable, tea house and traditional garden.

Transfers to Yokohama Municipal Subway’s Green Line can also be made here.

This is the northern terminus of the Blue Line. Transfers can be made here to the Tokyu Den-en-toshi Line. 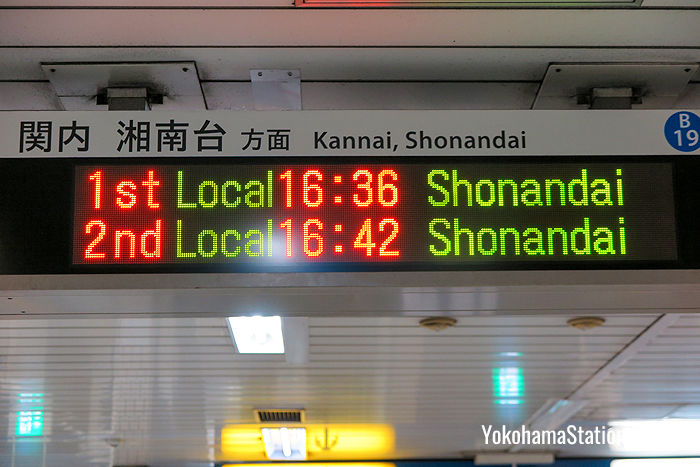 There are 20 stations between Yokohama and Shonandai stations.

The Blue Line’s key southbound destinations are listed below with locations of interest and transfer points. Example fares and journey times are given from Yokohama Station.

Transfers can be made here to JR East’s Negishi Line and Yokohama Line.

Kannai Station is convenient for Kanagawa Prefectural Museum of Cultural History and the NYK Maritime Musuem. Yokohama Chinatown is a 10 minute walk south of this station.

Transfers can be made here to JR East’s Tokaido Line, Yokosuka Line and Shonan-Shinjuku Line.

This station is a 5 minute walk from Yumegaoka Station on Sagami Railway’s Izumino Line.

Shonandai Station is located in the north of the city of Fujisawa which is a popular location for its beaches, summer fireworks displays, and for its easy access to the island of Enoshima.

For more information on Yokohama’s subway system see our article on the Green Line and our general guide to Yokohama Municipal Subway System.