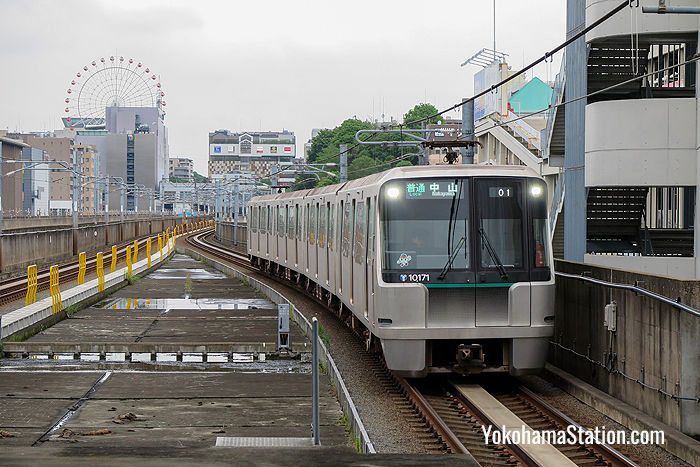 A Green Line train arriving at Center-Minami Station. Some parts of the line are above ground

There are just 10 stations on the Green Line and a full journey takes around 20 minutes.

The Green Line’s key destinations are listed below with locations of interest and transfer points. Example fares and journey times are given from Nakayama Station. 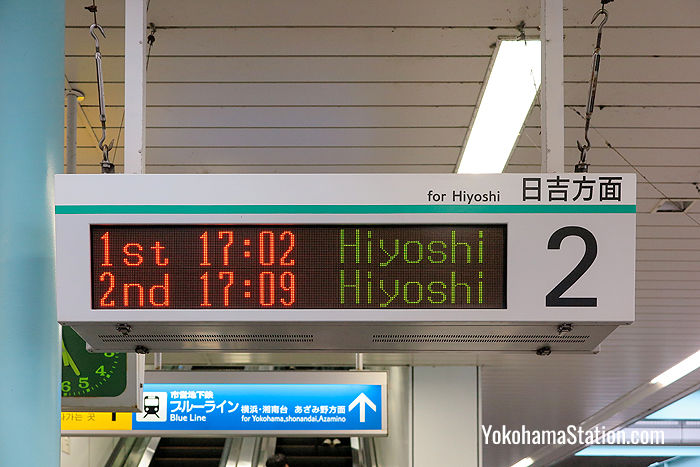 Bus services from Nakayama Station run to Yokohama Municipal Zoo (also called Zoorasia). The zoo keeps animals in spacious enclosures that replicate their natural environment, and exhibits creatures such as Amur leopards, African elephants, Sumatran tigers, polar bears, and red pandas. Pony and camel rides are also available for children. Buses for the zoo run from the number 1 bus stop outside the station’s south exit and take around 20 minutes to reach the zoo.

Center-Minami Station is a 4 minute walk from Chigasaki Castle Ruins Park which is a pleasant green space where one can see the outlines of the former castle buildings. Six minutes’ walk from the station is a pretty little temple called Shokakuji which has a variety of seasonal flower displays.

Yokohama History Museum is a four minute walk from Center-Kita Station. This local history museum has exhibits ranging from prehistoric times to the present day. Although it is currently closed for renovations, the Yokohama History Museum will reopen in April 2020. Beside the museum is Otsuka/Saikachido Relics Park which is an open archaeological site where you can view the remains of ancient burial grounds, a moat, and pit dwellings. This park also includes Tsuzuki Minka-en which is a reconstructed private residence of the Edo period (1603 – 1868). The residence includes a main house, stable, tea house and a traditional Japanese garden.

Transfers to Yokohama Municipal Subway’s Blue Line can also be made here.

Exit here for Yokohama International Swimming Pool. This is one of Japan’s biggest swimming facilities with a heated sub pool that is available all year round, and a main pool that is covered in the winter season (November to March) and used as tennis courts and a basketball arena. The facilities also include a diving pool (available in spring and summer), a fully equipped gym, and outdoor multipurpose courts. Yokohama International Swimming Pool is a 7 minute walk from Kita-Yamata Station.

This station is convenient for the Hiyoshi Campus of Keio University. Hiyoshi Station is the eastern terminus of the Green Line. Transfer here to the Tokyu Toyoko Line and the Tokyu Meguro Line.

For more information on Yokohama’s subway system see our article on the Blue Line and our general guide to Yokohama Municipal Subway System.