The Tokaido Shinkansen is a high-speed “bullet train” rail line operated by JR Central between Tokyo Station and Shin-Osaka Station. This shinkansen line provides a fast link between the major cities of Tokyo and Yokohama in eastern Japan, Nagoya in central Japan, and Kyoto and Osaka in the west. Beyond Shin-Osaka Station many through services continue further west on the Sanyo Shinkansen to destinations like Kobe, Himeji, Hiroshima and Hakata in Kyushu. 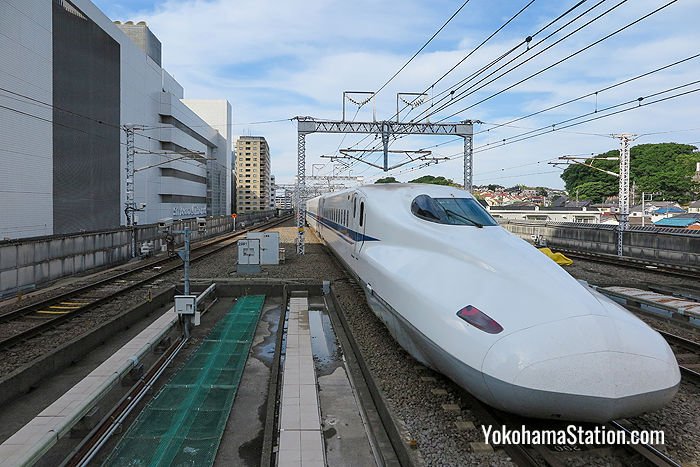 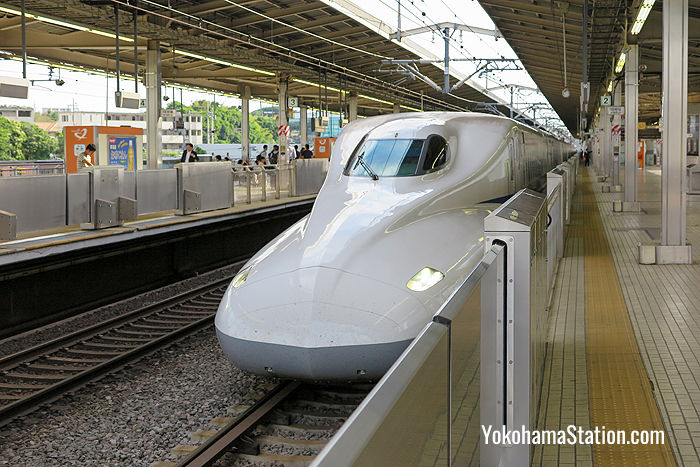 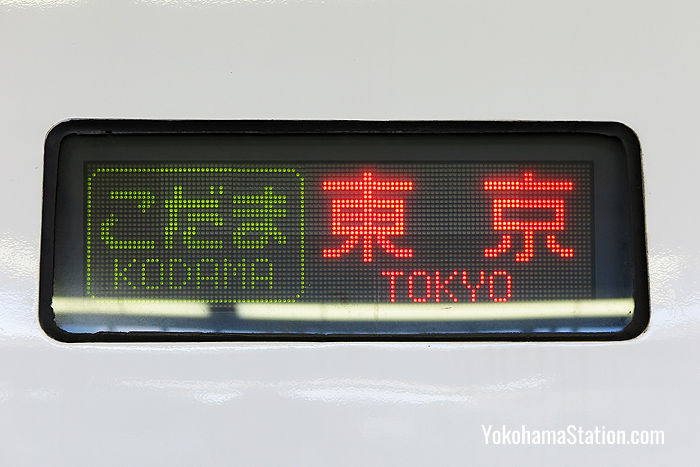 A carriage banner on a Kodama service bound for Tokyo

Three types of bullet train run on the Tokaido Shinkansen: the Nozomi, Hikari and Kodama. The Nozomi is the most frequent and the fastest train as it travels the whole distance from Tokyo to Shin-Osaka in just 2 hours and 30 minutes. However, this train is not covered by the Japan Rail Pass. To use the Japan Rail Pass, your best choice is the Hikari which takes 3 hours to cover the same distance. The Kodama stops at every station on the way and so takes around four hours. 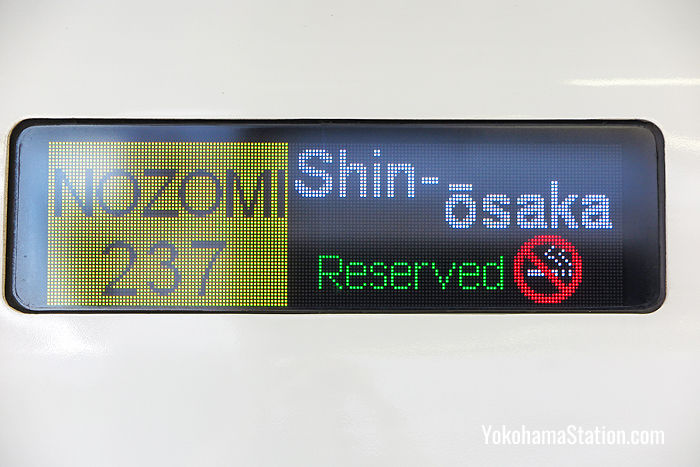 A carriage banner on a Nozomi service bound for Shin-Osaka

The following stations are served by the Tokaido Shinkansen. The Kodama serves all the stations below, but stations in brackets () are not served by all Nozomi or Hikari services.

The key northbound and westbound destinations listed below are given with example journey times and non-reserved ticket fares from Shin-Yokohama Station. Reserved ticket prices change according to the season but typically cost around 500 yen extra. 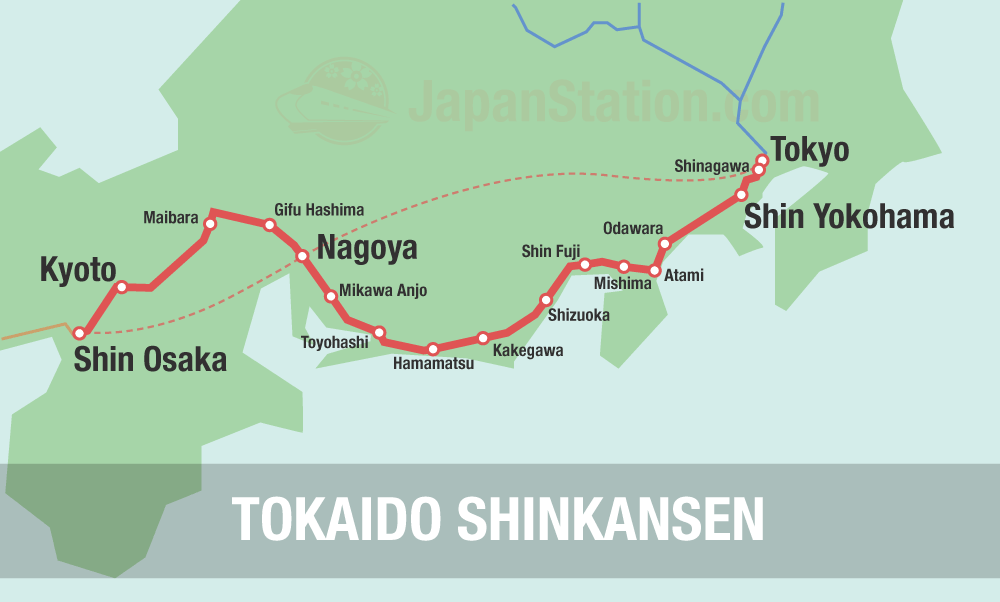 If you are traveling by shinkansen, then Shin-Yokohama Station is your gateway to Yokohama City. Yokohama’s top attractions include the observation deck in the Landmark Tower, Minato Mirai bay area, the historic western-style buildings of the Yamate district, the Sankeien Garden, and the Chinese restaurants of Yokohama Chinatown. Shin-Yokohama Ramen Museum is a popular attraction which is just a five minute walk from Shin-Yokohama Station. The museum features a recreation of a Tokyo downtown district in the year 1958 and contains a food court with ramen noodle shops from all over Japan. 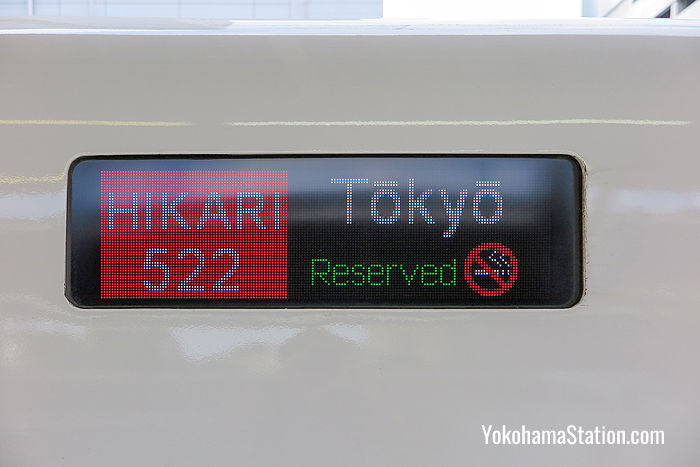 A carriage banner on a Hikari service bound for Tokyo

Shinagawa Station is one of two Tokaido Shinkansen stops in the city of Tokyo. This station is mainly important as a transfer point for other railway lines, but there are a small number of attractions in the surrounding area. Sengakuji Temple, is significant as the burial place of the legendary 47 ronin, samurai warriors who are famous for their loyalty to their lord. There are also a number of museums in the area, including the Hara Art Museum, the Jade Ore Museum, Hatakeyama Memorial Museum of Fine Art, and the Nikon Museum which details the history and technology of Nikon cameras and other products. 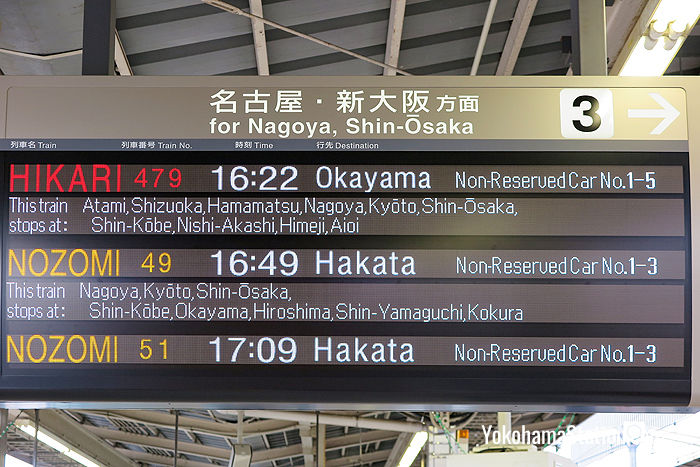 Tokyo Station is served by several shinkansen lines and so is Tokyo city’s main intercity railway hub. Tokyo’s top attractions include the observation decks of Tokyo Skytree and Tokyo Tower, Asakusa’s Sensoji Temple, the zoo, museums and cultural facilities of Ueno Park, the forest shrine of Meiji Jingu, the gardens of Shinjuku Gyoen Park, the fashion boutiques of Harajuku and Omotesando, the nightlife of Roppongi and Shinjuku’s Golden Gai, and the bright lights of Shibuya Crossing. Close by Tokyo Station are the gardens of the Imperial Palace and Mitsubishi Ichigokan Museum which exhibits 19th century European art. 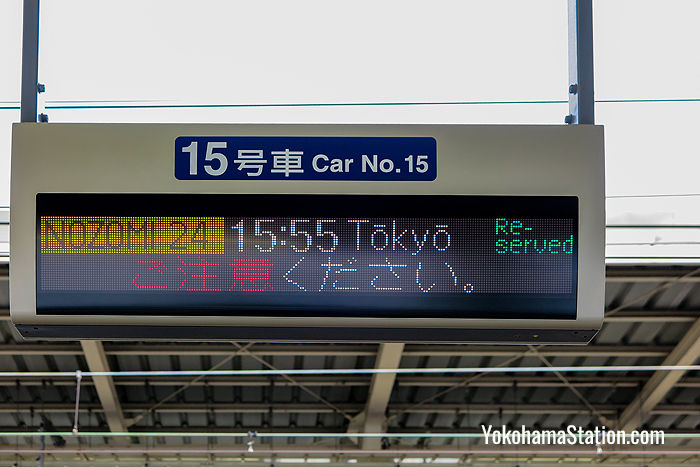 Nagoya is a major port city in central Japan which is particularly famous for its unique local dishes such as tebasaki chicken wings and kishimen noodles. Popular tourist attractions include the Hommaru Palace within the grounds of Nagoya Castle, the Tokugawa Art Museum and Tokugawa Garden, and Osu Kannon Temple which stands at the center of the nostalgic Osu shopping district.

Kyoto is one of Japan’s best preserved cities, with thousands of temples and shrines, and several famous palaces and gardens. Kyoto’s major tourist attractions include the Golden Pavilion of Kinkakuji Temple, Fushimi Inari Taisha Shrine, and the bamboo forest of Arashiyama. Kyoto is also well-known for its traditional cuisine and riverside dining, as well as more contemporary architecture such as Kyoto Tower, and the Kyoto Station building.

At Shin-Osaka Station transfers can be made to the Sanyo Shinkansen for destinations further west, the JR Kyoto Line, the JR Osaka Higashi Line, and the Midosuji Subway Line, which is the main line running north to south of the Osaka city subway network. 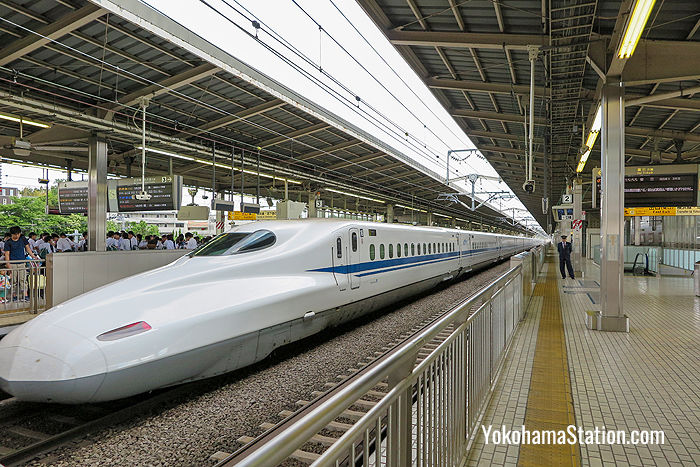 The view from Platform 2 at Shin-Yokohama Station

We provide detailed route maps for both the Tokaido and Sanyo Shinkansen lines. Current timetables for the Tokaido Shinkansen can be downloaded as English-language PDFs from JR Central. To plan your journey quickly and simply use English language route finders such as Hyperdia or the Japan Transit Planner.