Yokohama Chinatown is called “Yokohama Chukagai” in Japanese and is one of three Chinatowns in Japan. The others are located in Kobe and Nagasaki, but Yokohama Chinatown is the largest and covers an area of 500 square meters with around 620 businesses. Here you can find authentic Chinese restaurants, shops, temples, and plenty of Chinese street food to snack on as you explore the colorful streets and alleyways. 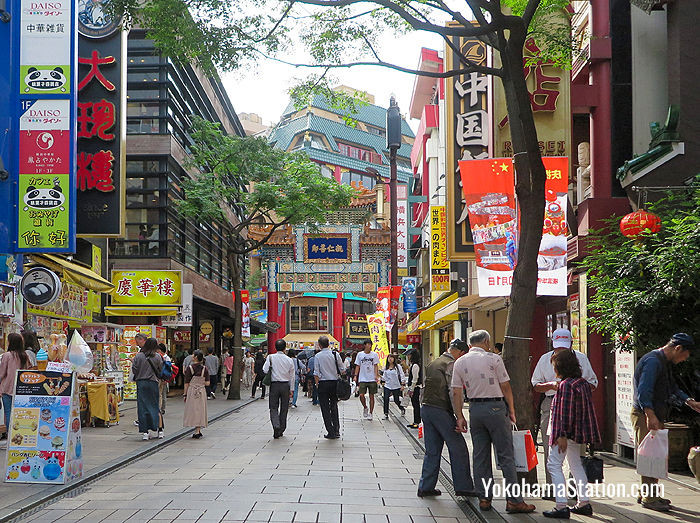 A street scene in Yokohama Chinatown

Yokohama Chinatown’s history dates back to 1859 when Yokohama was opened up as an international port. Many Western merchants came to Yokohama at this time, and as regular trading routes for tea and silk were established with Hong Kong and Shanghai there was an influx of Chinese settlers too. The first Chinese settlers worked as go-betweens and interpreters, but soon Chinese traders, merchants and restaurant owners also established themselves in Yokohama. At that time foreigners had to live in strictly designated areas, and in the area settled by the Chinese they soon established their own temple, theater, school, and assembly hall. That was the beginning of the Chinatown we know today, which since the establishment of diplomatic relations with China in 1972 has grown to be one of Yokohama’s major sightseeing attractions. 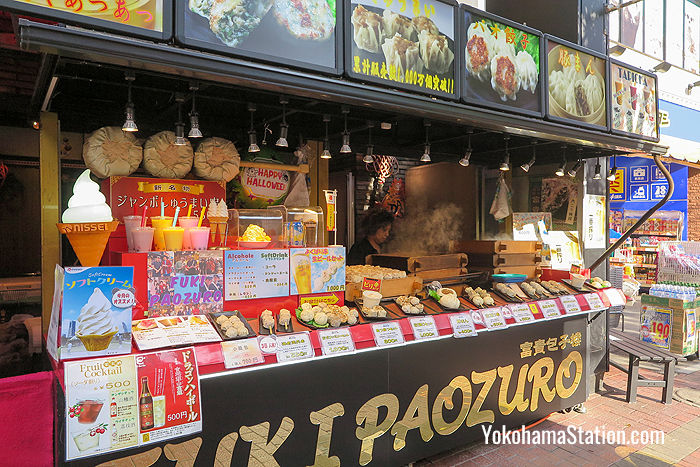 Chinatown features ten highly decorated traditional pailou-style Chinese gates which are located both inside Chinatown and on its edges. Of these there are four main entry gates with have been erected around Chinatown at the four points of the compass according to the rules of feng shui (Chinese geomancy). 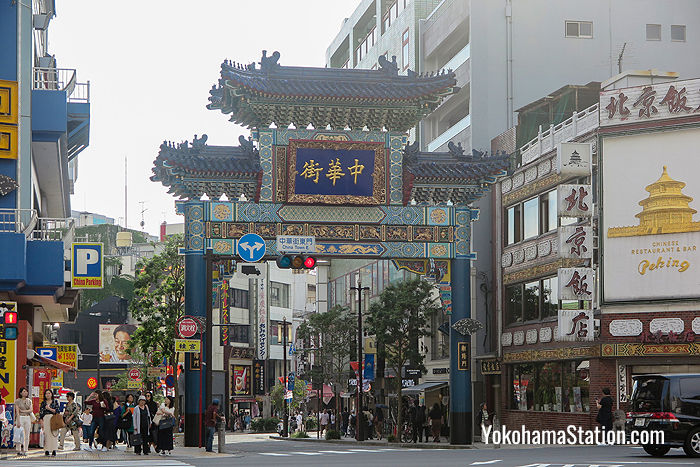 The east gate stands near Yamashita Park and is called Choyomon which means the “Sunrise Gate”. This gate’s guardian deity is the Blue Dragon of the East (called Seiryu in Japanese), and so this gate’s color is also blue. Seiryu is a god of the spring and brings prosperity. If you approach Chinatown from Motomachi-Chukagai Station, you will pass through this gate. 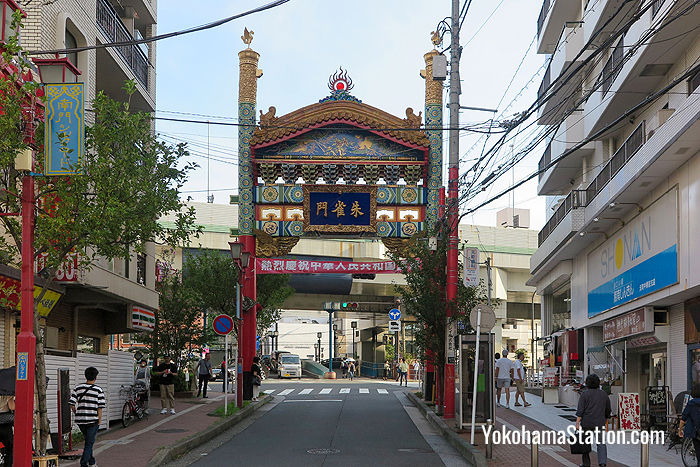 The south gate is called Suzakumon and is named after Suzaku: the flaming Vermilion Bird of the South. Suzaku is a god of the summer, brings good fortune and guards against disasters. This gate stands between Chinatown and the Motomachi shopping streets. 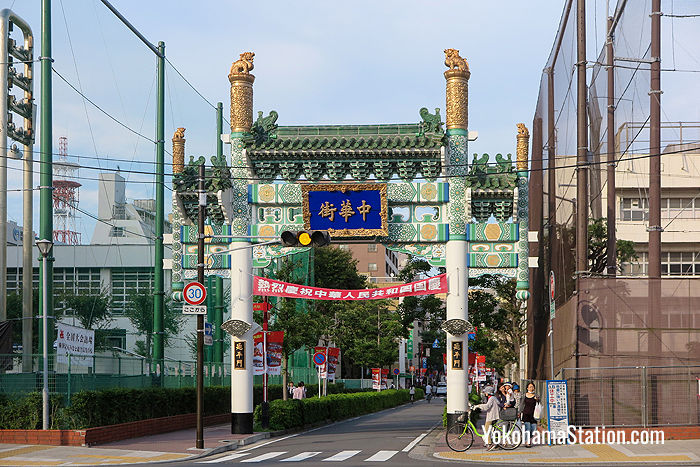 The west gate is called Enpeimon which means “Long Peace Gate” and its guardian deity is Byakko: the White Tiger of the West. Byakko is a god of the autumn and brings peace and tranquility. You will pass through this gate if you approach Chinatown from Ishikawacho Station. 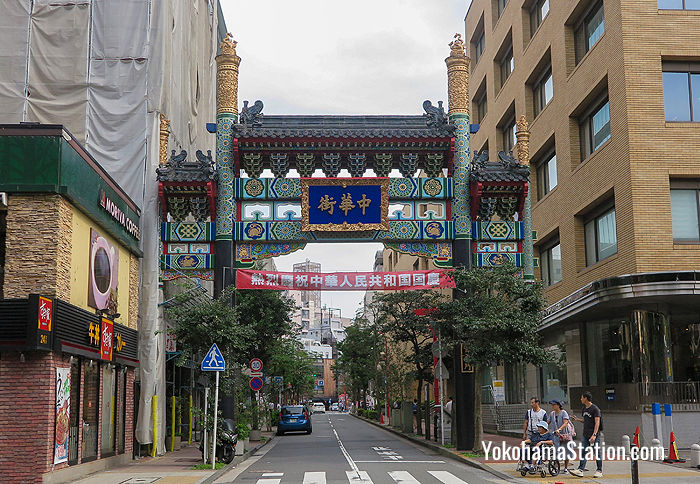 The north gate is called Genbumon and is named after Genbu: the Black Tortoise of the North. Genbu is a god of winter and brings a long life and prosperity to your children. This gate faces onto Yokohama Park and Yokohama Stadium and is the gate you will pass through if you are approaching Chinatown from Kannai Station. 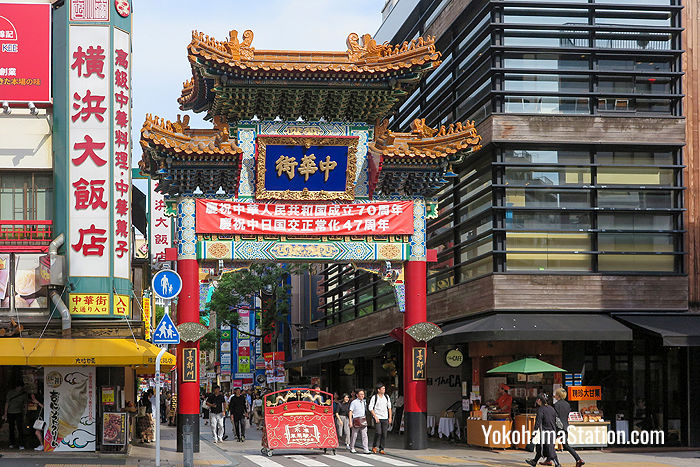 The Zenrinmon or Good Neighbour Gate

There are six more gates dotted around Chinatown. One of the most impressive is the Zenrinmon, which stands at the western entrance to Chinatown’s main street Chukagai Odori. The Zenrinmon was actually the first of the gates to be built and was erected in 1955 as a symbol of hope in the post-war recovery. Now this gate is seen as the iconic gate of Chinatown. “Zenrin” means “good neighbour” and the gate is also a symbol of friendly relations between the Chinese and Japanese peoples. Yokohama Chinatown was previously known as Nankin-machi (meaning “Nanjing Town”), but after the characters “Chukagai” (meaning “Chinatown”) were carved onto this gate, Chukagai became the common name for Yokohama’s Chinese settlement. 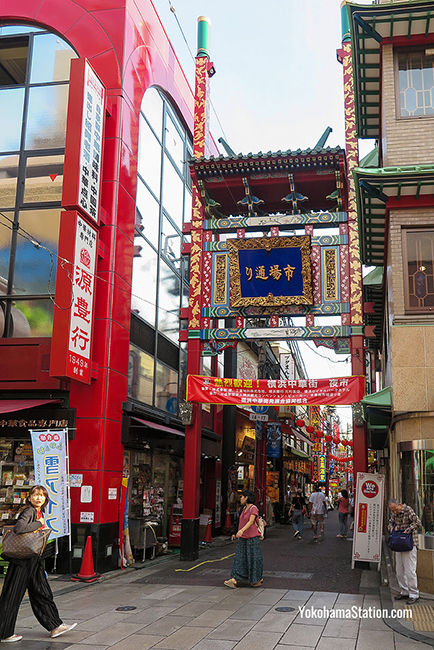 One of the gates to Ichiba-Doori Shopping Street

Ichiba-Dori is a lively and atmospheric street market running north-to-south between Chukagai Odori and Kanteibyo Road. Ichiba Dori was first established in the early 1920’s when a number of essential food stores such as butchers, greengrocers, fishmongers, and tofu makers, began to spring up in the area to supply the local restaurants. 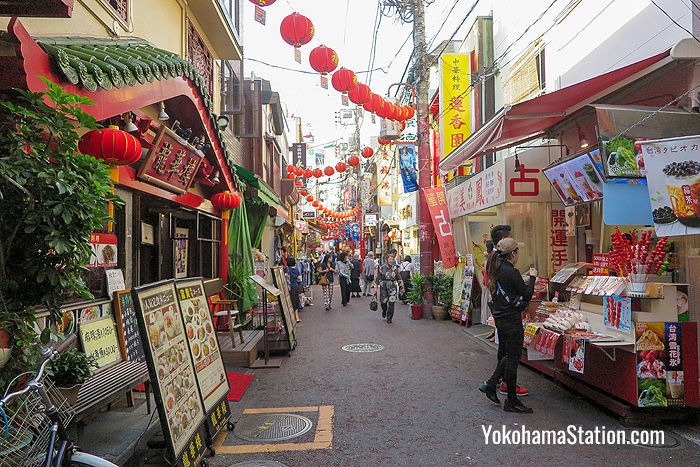 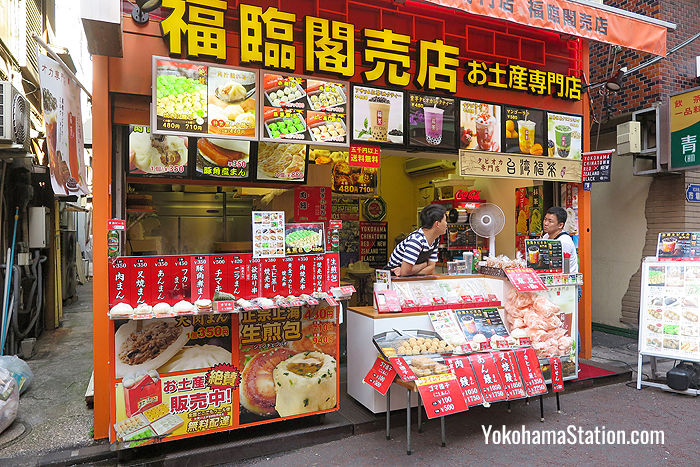 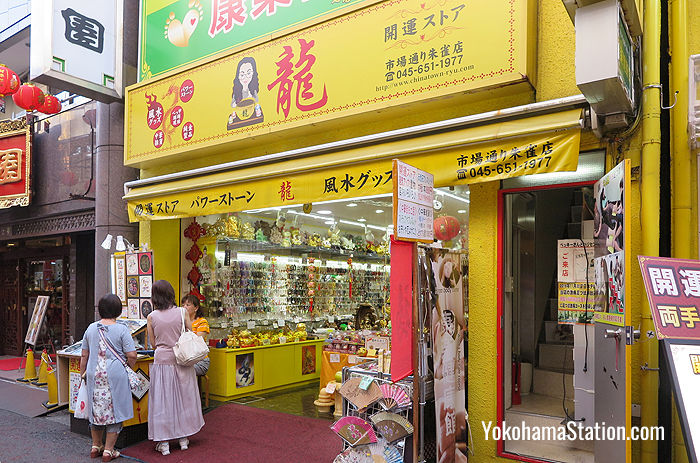 Ichiba-Dori is easy to recognize as it has two traditional gates standing at each end of the street. Here is a map showing its location. 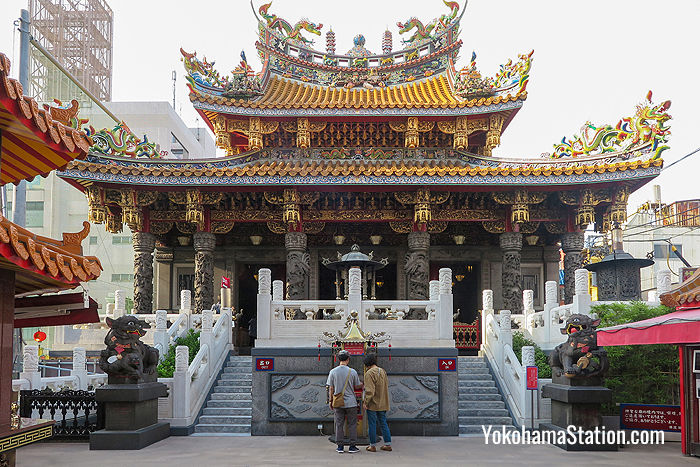 Yokohama Chinatown has two main temples. The oldest is Kanteibyo which was first established as a small wayside shrine by a single Chinese settler in 1862. With funds raised by the local Chinese community, this was rebuilt as a complete temple in 1871. The primary deity worshipped in this temple is Guan Yu, who was originally a heroic 3rd century general, but who is now popular among Chinese people as a god of good business, prosperity, learning, and success in examinations. Here is a map showing Kanteibyo’s location. 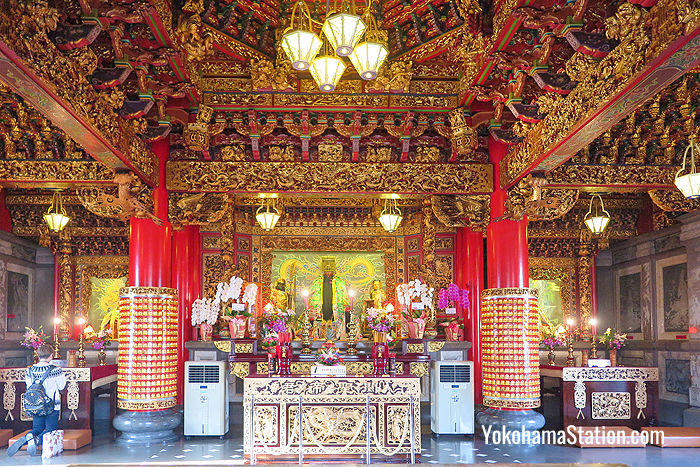 The second temple is formally called Ma Zhu Miao or more commonly Masobyo, and it is dedicated to Mazu, the goddess of the sea. Masobyo was opened in 2006 and many people now come here to pray for a safe travels before setting off on a journey. Here is a map showing Masobyo’s location. 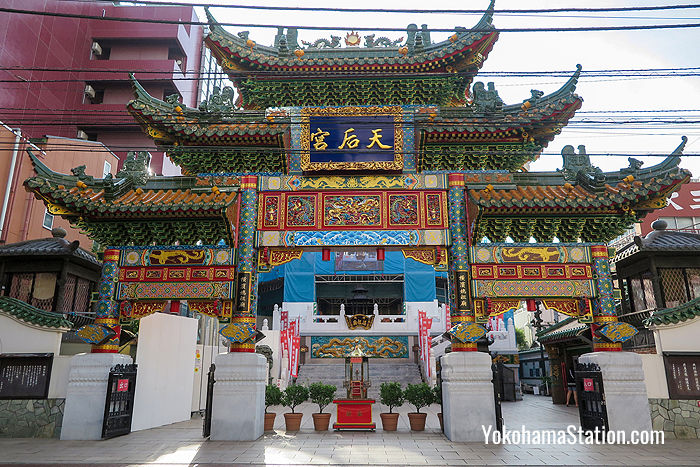 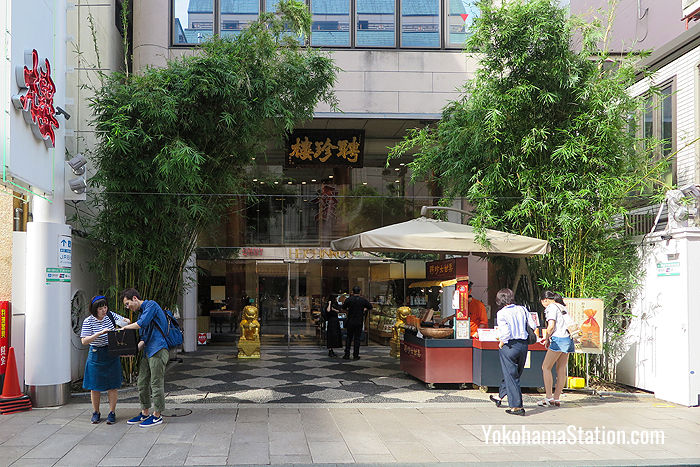 Heichinro was established in 1884 and is the oldest Chinese restaurant in Japan. This distinguished restaurant serves Cantonese style dim sum with such dishes as noodles, stir fries, steamed buns, and dumplings with a variety of fillings. Both casual meals or full course meals can be enjoyed here and an English menu is available. Here is a map showing Heichinro’s location. 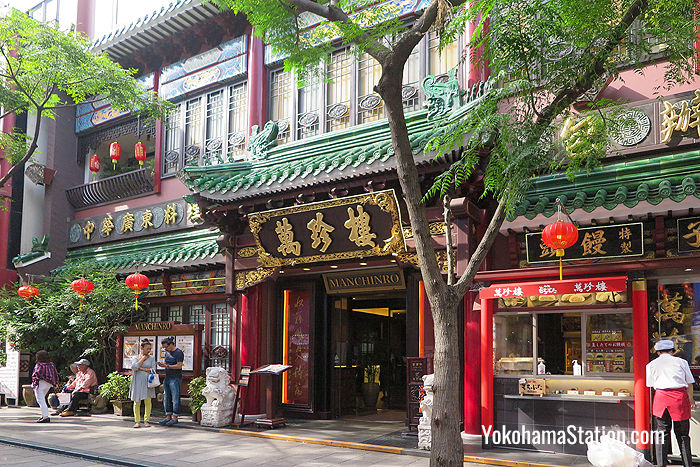 Manichinro Honten first opened in Yokohama in 1892. This restaurant excels in Cantonese seafood cuisine as well as standards such as Peking duck and wok-fried dishes such as pork and beans, or stir-fried beef, rice, and vegetables. Both course meals and individual dishes can be enjoyed here and an English menu is available. This restaurant also has a gift shop where you can buy Chinese tea and cookies, steamed pork buns, moon cakes, and shumai dumplings. Here is a map showing Manchinro’s location. 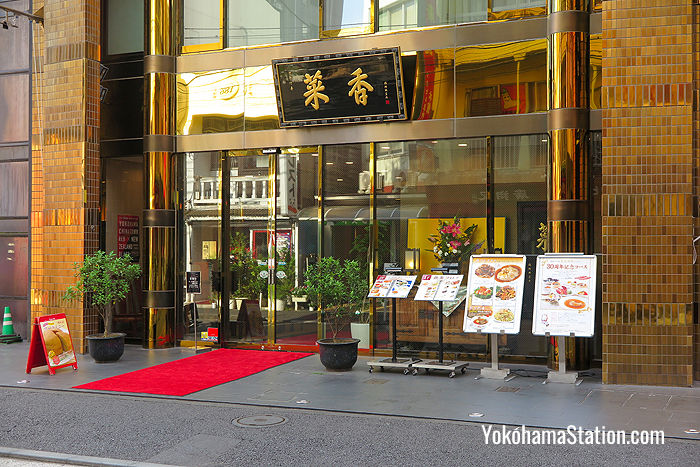 Chinese New Year is celebrated with a passion in Yokohama Chinatown with lion and dragon dances, parades, music and songs, bright illuminations, and dramatic acrobatic performances. 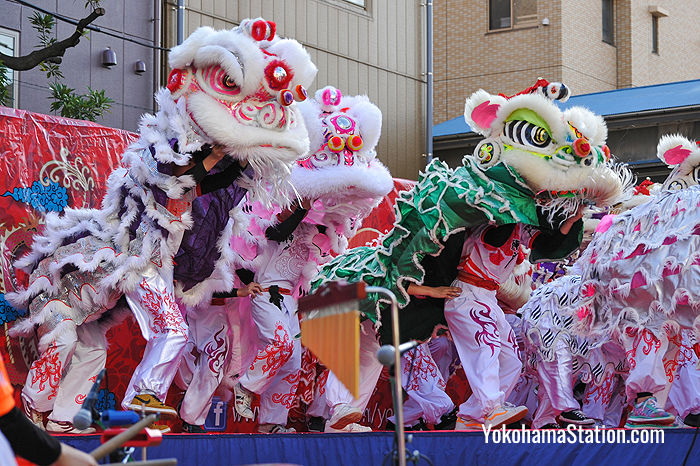 Also called the Spring Festival this major celebration is held each year according to the lunar calendar sometime between the end of January and late February. A countdown event is held on Lunar New Year’s Eve and the festivities then continue for another 15 days before being brought to a close with a beautiful lantern festival.