The Tokaido Main Line is a railway line that connects the city of Tokyo in eastern Japan and the city of Kobe in western Japan. This is a great distance, so the line is run in separate sections by three companies: JR East, JR Central, and JR West. This article is mainly concerned with the section of the line operated by JR East that runs between Tokyo Station and Atami Station. This section is usually called simply the “Tokaido Line” in JR East station signage. 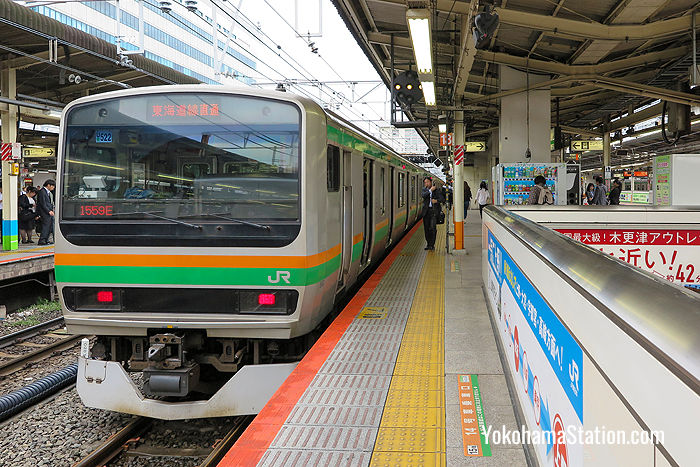 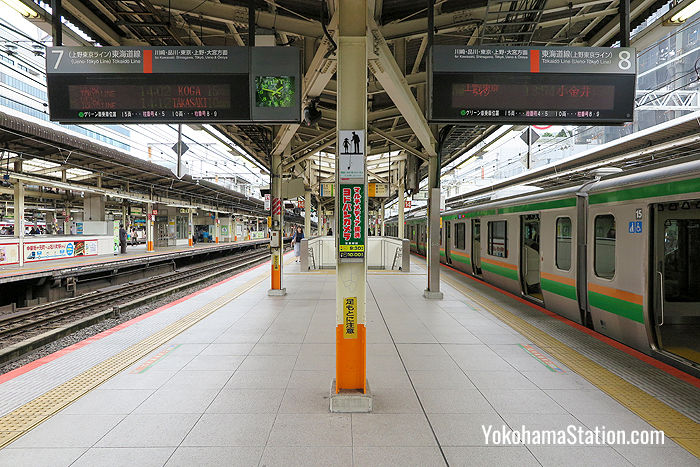 There are five stations between Yokohama and Tokyo.

However, many Tokaido Line services from Yokohama are through services that continue beyond Tokyo Station on the Ueno-Tokyo Line as far as Ueno Station and on other lines beyond that. The northbound destinations are listed below with example fares and journey times given from Yokohama.

Kawasaki is a major industrial city but it does have a number of sightseeing attractions. Kawasaki Daishi Temple (also called Heiken-ji) is a large Shingon Buddhist temple complex dating from 1128. On the temple grounds are several beautiful buildings including an unusual octagonal five-storied pagoda. Japan Open-Air Folk House Museum (Nihon Minka-en) is an outdoor architectural museum where you can see preserved traditional farm houses, samurai residences, and merchant houses from all over Japan. Other locations of interest are the Toshiba Science Museum, the Taro Okamoto Museum of Art, and for manga fans the Fujiko F. Fujio Museum which is dedicated to the creator of Doraemon.

Transfers can be made here to the JR Nambu Line.

There are several museums near Shinagawa Station and one very famous temple. The Nikon Museum tells the story of Nikon cameras and other products and has several rare and valuable cameras on display. The Hara Museum is arts and design museum housed in a Bauhaus building dating from 1938. The Jade Ore Museum is a private gallery with a large collection of jade stones and artistic objects carved from jade. Hatakeyama Memorial Museum of Fine Art exhibits a collection of Chinese, Korean, and Japanese art works related to the tea ceremony. Sengakuji Temple is the home of the tombs of the legendary 47 Ronin; a group of heroic samurai who are famous for their loyalty to their master.

Transfers can be made at Shinagawa Station to the JR Yamanote Line and the Tokaido Shinkansen.

A five minute walk from the current Shimbashi Station is the Old Shimbashi Station Railway Museum which has extensive displays related to local railway history. Just outside Shimbashi Station’s Hibiya Exit there is an old 1945 steam locomotive on display in a popular meeting spot called “SL Square”.

Transfers can be made here to the JR Yamanote Line, the Toei Asakusa Line, and the New Transit Yurikamome Line.

Attractions near Tokyo Station include the Imperial Palace Gardens, Mitsubishi Ichigokan Museum which exhibits 19th century European art, and the original red brick façade of Tokyo Station itself which dates from 1914. All of these locations can be reached via the Marunouchi Exit on the station’s west side. The Tokyo Station Hotel offers 150 guestrooms and suites located right in the Tokyo Station Building. 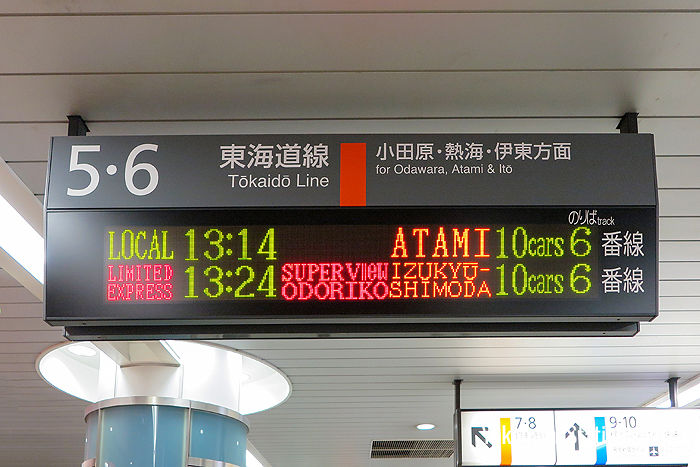 There are 17 stations between Yokohama and Atami.

Some services from Yokohama are through trains that continue beyond Atami on the Ito Line as far as Ito Station. The key southbound destinations are listed below with example fares and journey times given from Yokohama.

Ofuna Station is located in Kamakura City and has a number of sites of religious and historical interest. Ofuna Kannon Temple has a 25 meter high statue of the goddess of mercy and is a 5 minute walk from the station. Josenji Temple and the Taya Caves are a 14 minute bus ride from Ofuna Station. The meditation caves were dug into a limestone hill by the monks of Josenji and are decorated with ancient Buddhist carvings.

Transfers can be made here to the JR Negishi Line, the JR Shonan-Shinjuku Line, the JR Yokosuka Line, and the Shonan Monorail.

Fujisawa is popular for its beaches and summer fireworks displays, and for its easy access to the island of Enoshima. Enoshima is also a popular beach resort, and its other attractions include Enoshima Shrine which dates from 552, the Samuel Cocking Garden which is a botanical garden of tropical plants, the Sea Candle observation tower, and the Iwaya Caves with their Buddhist statues.

Transfers can be made here to the JR Shonan-Shinjuku Line, the Odakyu Enoshima Line, and the Enoshima Electric Railway (also called the Enoden).

Odawara’s attractions include Kanagawa Prefectural Museum of Natural History, Odawara Flower Garden, Matsunaga Memorial Hall (Matsunaga Kinenkan): a traditional villa and garden with exhibits of art and antiques, and Miyukinohama beach which is very popular in the summer. However the top attraction is Odawara Castle: a 1960s reconstruction of the 15th century original which houses a museum and a top floor observation deck. Odawara Castle Park is also a popular cherry blossom viewing location in the spring.

Odawara is known as the gateway to the Hakone resort area. To get to Hakone, transfer to the Hakone Tozan Line at Odawara Station. Other transfers can be made here to the Tokaido Shinkansen, the Odakyu Odawara Line, and Izu-Hakone Railway’s Daiyuzan Line. 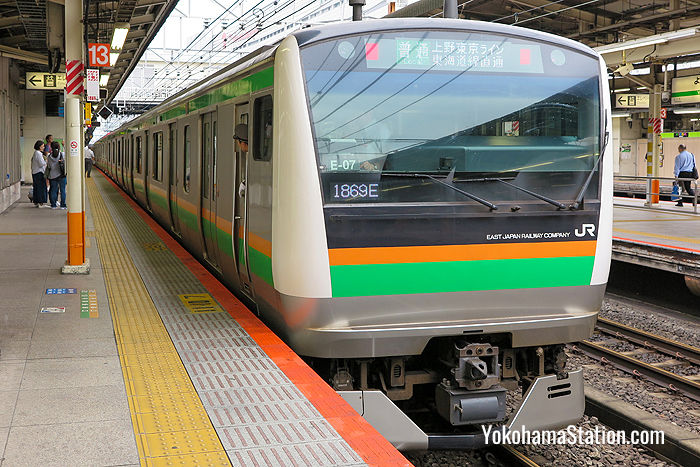 A local train bound for Atami at Yokohama Station

Atami is a famous seaside spa resort town on the coast of the Izu Peninsula with high rise luxury hotels, traditional ryokan style inns, and plenty of relaxing hot spring baths. Atami’s attractions include the MOA Museum of Art, Atami Adult Museum (a sex museum), Atami Ropeway which carries cable cars to the top of Mount Hachiman, and Atami Castle: a Momoyama-style castle built in 1959 which houses historical displays, a restaurant, and an observation deck.

Transfers can be made at Atami Station to JR East’s Ito Line, to the Tokaido Shinkansen, and to JR Central services on the Tokaido Main Line bound for Numazu.

Some through trains continue beyond Atami on the JR Ito Line as far as Ito Station. Ito is a hot spring resort town on the Izu Peninsula which is famous for its scenic coastline. Popular hotels here are the Hinodeya and Yokikan which are traditional Japanese inns serving fine meals of local seafood and providing relaxing hot spring bathing facilities.

Transfers can be made here to the Izu Kyuko Line.

To plan your journey via the Tokaido Main Line use English language route finders like the Japan Transit Planner or Hyperdia. JR East has a PDF route map of their railway network in which both the Tokaido Line and Ito Line are colored orange.