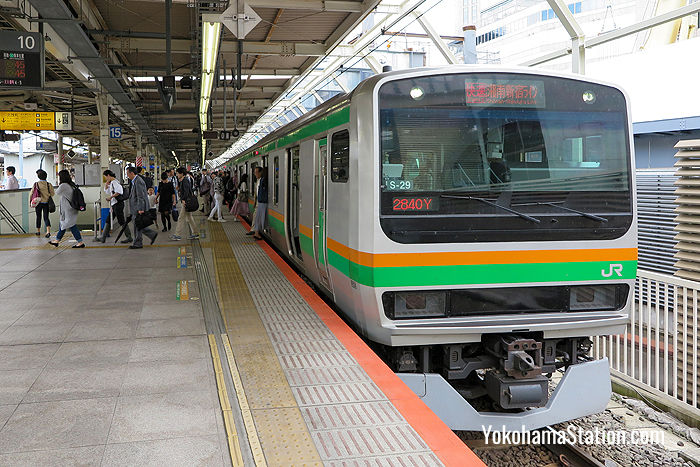 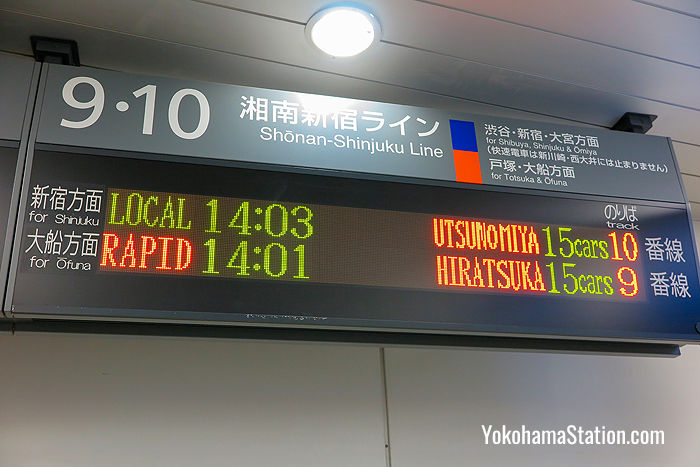 Departure information for platforms 9 and 10 at Yokohama Station

There are 12 stations between Yokohama and Omiya.

Exit here for the cultural attractions of Kawasaki City. Kawasaki Daishi Temple was first established in 1128 and its extensive grounds include several beautiful buildings and a rare octagonal five-storied pagoda. Japan Open-Air Folk House Museum (Nihon Minka-en) is an outdoor architectural museum with traditional buildings that have been moved here from all over Japan. These include historic farm houses, samurai residences, and merchant houses. Other locations of interest are the Taro Okamoto Museum of Art, the Toshiba Science Museum, and for manga fans the Fujiko F. Fujio Museum which is dedicated to the artists who created Doraemon.

Exit here to eat and drink at one of Ebisu’s many restaurants, cafes, and bars. A big attraction in this area is Yebisu Garden Place; a large commercial complex located on the site of the former Yebisu Beer Brewery. Within Yebisu Garden Place are a large number of shopping and dining facilities, a cinema, the Museum of Yebisu Beer, and the Tokyo Metropolitan Museum of Photography. Overlooking these facilities is Yebisu Garden Place Tower; a large skyscraper with restaurants on the 38th and 39th floors from which diners can enjoy a splendid view over the city.

Shibuya is a fashionable center of youth culture and nightlife, with many department stores, fashion boutiques, restaurants, bars and clubs. A statue of a faithful dog called Hachiko is a popular meeting point outside the station. Close by the statue is the famous Shibuya Crossing intersection which is surrounded by giant video screens and neon-lit signs.

Shinjuku is one of Tokyo’s biggest commercial and entertainment districts and has many attractions. The Tokyo Metropolitan Government Building No. 1 is a 48 story high building designed by Kenzo Tange with free observation decks on the 45th floor. Close by Shinjuku Station’s East Exit, Omoide Yokocho is an alleyway full of small bars and eateries serving yakitori, kushikatsu, soba noodles, sushi, and ramen. Kabukicho is a large area of bright lights, clubs, bars, and restaurants. Golden Gai is a tiny area of alleyways filled with tiny bars and diners. Shinjuku Gyoen is a large park with both Western and traditional Japanese style gardens.

Ikebukuro is a busy commercial district which is packed with department stores, electronics stores, restaurants and bars. The biggest attraction here is Sunshine City; a large commercial complex with shops, restaurants, hotels, a museum, a planetarium, and an aquarium. The Sunshine 60 skyscraper inside Sunshine City has stunning views from the 60th floor observation deck.

There are 5 stations between Yokohama and Ofuna.

Ofuna Station is located in the city of Kamakura. Ofuna Kannon Temple is a 25 meter high statue of Kannon, the goddess of mercy, which is a 5 minute walk from the station. Josenji Temple and the Taya Caves are a 14 minute bus ride from the station. The meditation caves were dug into a limestone hill by monks and decorated inside with Buddhist carvings.

From Ofuna Station passengers can take the Yokosuka Line to the seaside towns of Kamakura and Zushi, or the Tokaido Line to the beach resorts of Fujisawa and the castle town of Odawara. Transfers can also be made here to the Shonan Monorail which runs to Shonan-Enoshima Station in Fujisawa City. 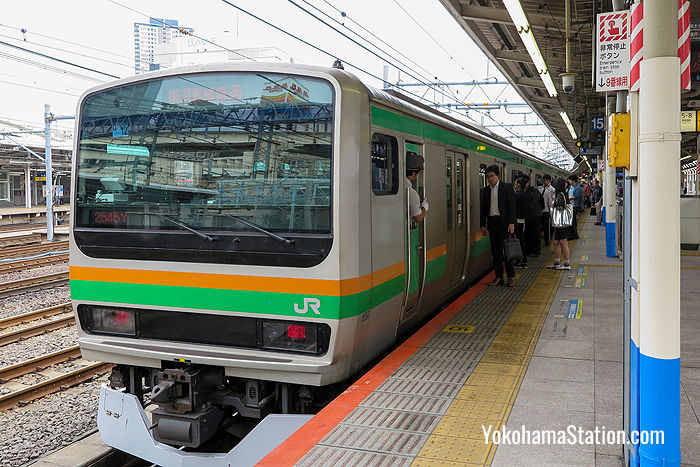 A local through service bound for Zushi at Platform 9, Yokohama Station