The Nippon Maru is a sailing ship which was formerly a training ship for naval cadets and is now permanently docked in Yokohama’s Minato Mirai area as a museum ship. It is one of the most beautiful sightseeing attractions in Yokohama’s bayside area. 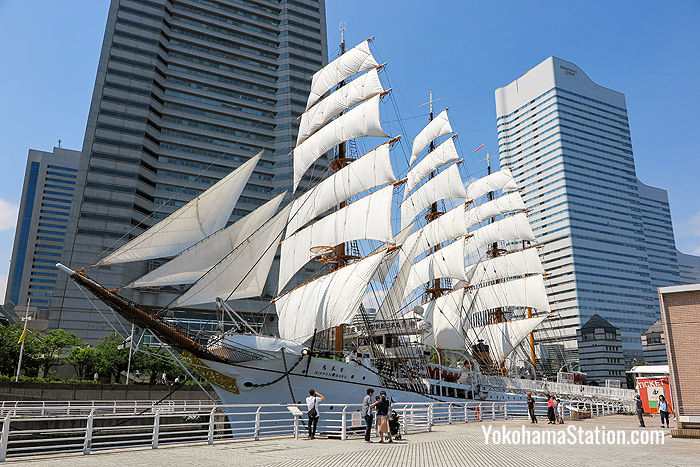 The Nippon Maru is 97 meters long, 13 meters across, and is rigged with four masts, the tallest mast standing 46 meters above the water line. When the ship is fully decked out with all 29 of its sails, it is a really impressive sight. 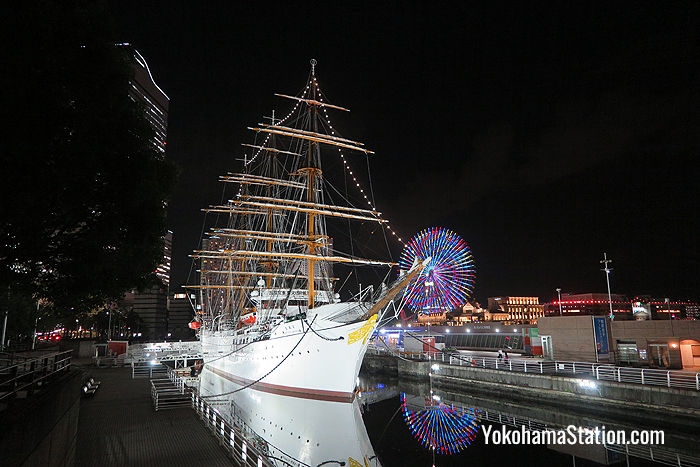 The Nippon Maru is illuminated at night

The need for training ships like the Nippon Maru was born out of a terrible tragedy. In March 1927, a smaller training ship called the Kirishima Maru was caught in a storm off the coast of Chiba Prefecture and all 53 crew members and training cadets were drowned. Following this disaster it was decided that larger training vessels should be built so that sea cadets could be trained more safely. Two training vessels were built in Kobe by Kawasaki Shipbuilding. The first was the Nippon Maru which was launched in January 1930 and the second was her sister ship the Kaiwo Maru which was launched in February that same year. The Kaiwo Maru is now also a museum ship which is docked in Imizu City, Toyama Prefecture. 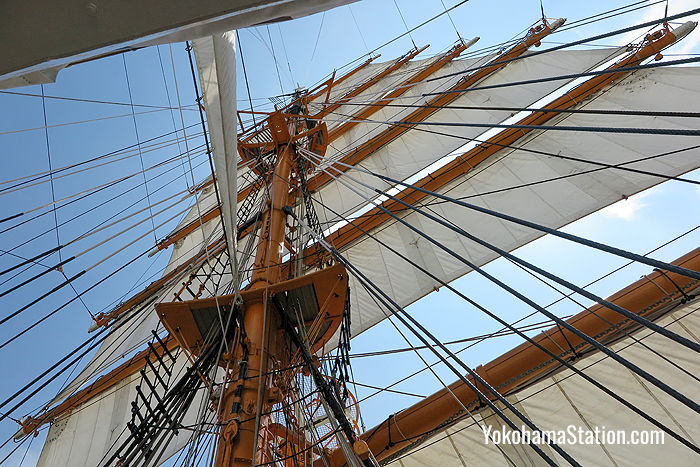 A close-up view of the rigging on the Nippon Maru

When first launched, the Nippon Maru was considered so beautiful that she was nicknamed the “Pacific Swan” and the “Lady of the Sea”. The ship remained in service for 54 years, training 11,500 cadets and traveling 1,830,000 kilometers which is equivalent to 45.4 trips around the world! 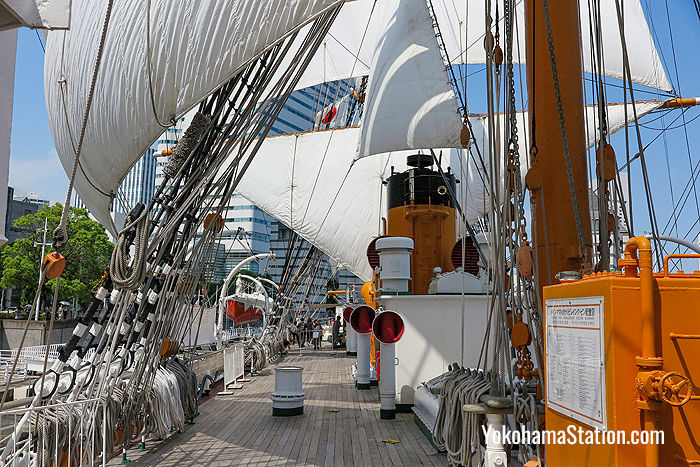 A view of the deck

In 1984 the Nippon Maru was retired and donated to Yokohama City. However, her replacement, a larger and more modern sailing ship also called the Nippon Maru, is still used to train young sailors to this day. In 2017, in recognition of her historic importance, the original Nippon Maru was nationally designated as an Important Cultural Property. 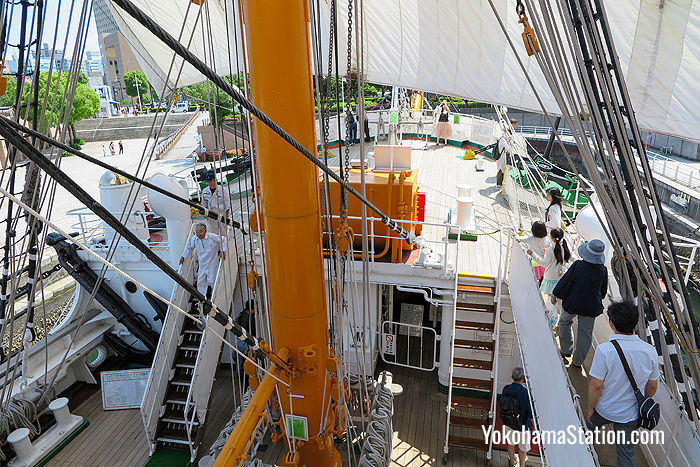 On Board the Ship

The Nippon Maru is very well preserved and visiting the ship can give you a good idea what life at sea was like in the first half of the 20th century. Here are a few things you can see on board the ship. 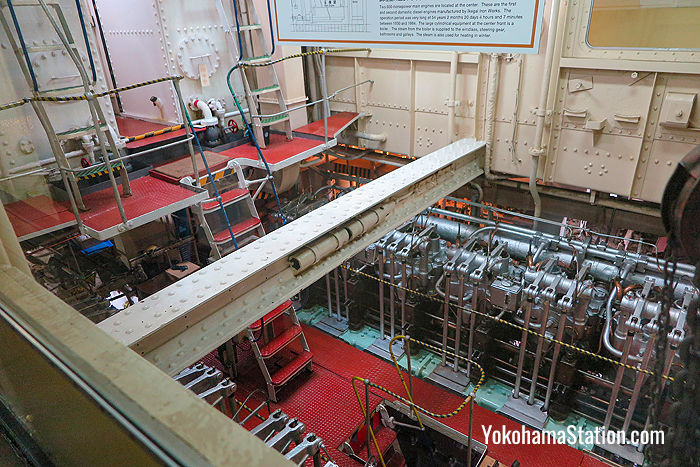 Although the Nippon Maru is a sailing ship it was also fitted with two 600-horsepower diesel engines for a supply of backup power. These are the same engines that were fitted in 1930 so they had a very long working life. 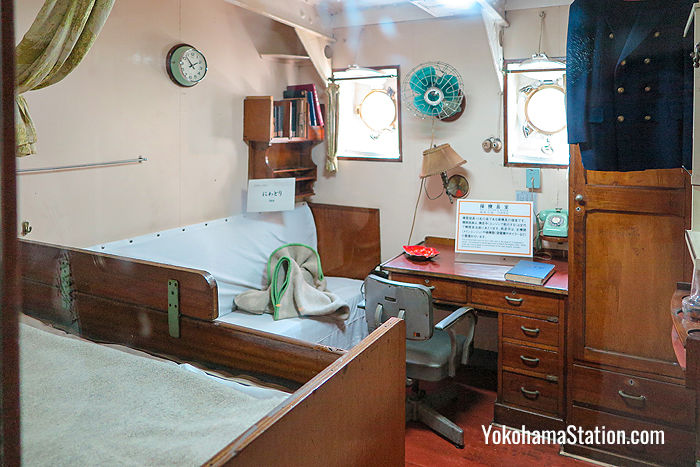 The Number One Oiler’s Room

The Number One Oiler was in charge of the engineers who maintained the engines, generators, and boilers while the ship was at sea. 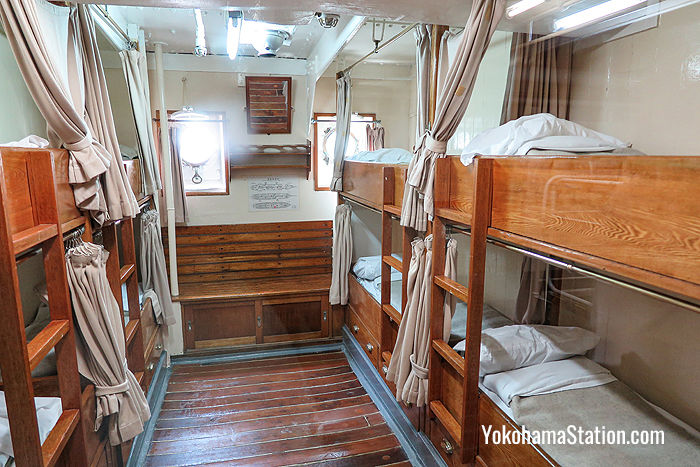 These sleeping quarters may look small, but this is where the cadets relaxed. 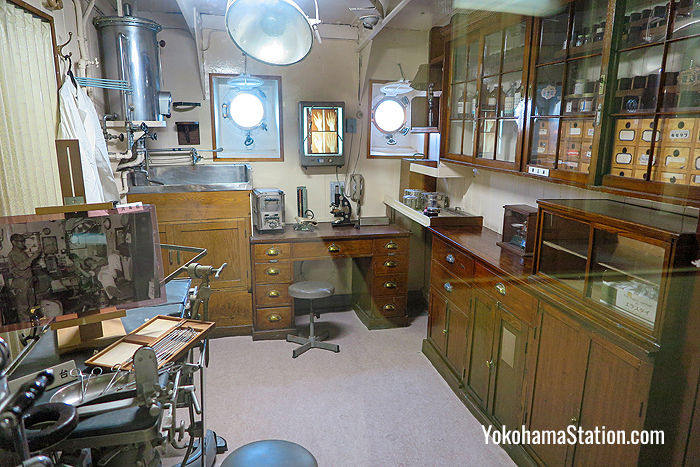 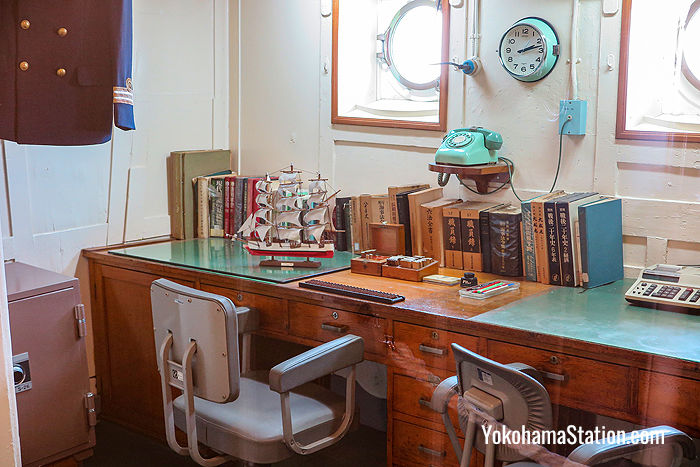 The ship’s purser was in charge of accounts, mail, and general administration. 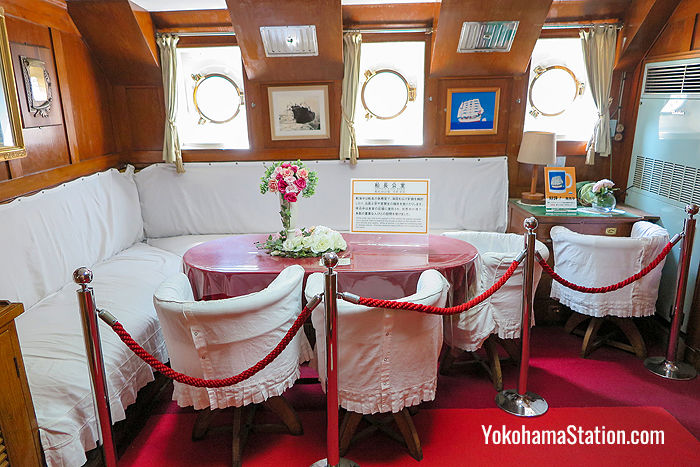 This was the room where the captain would spread out his charts, receive reports from his officers, and receive guests when the ship was in port. 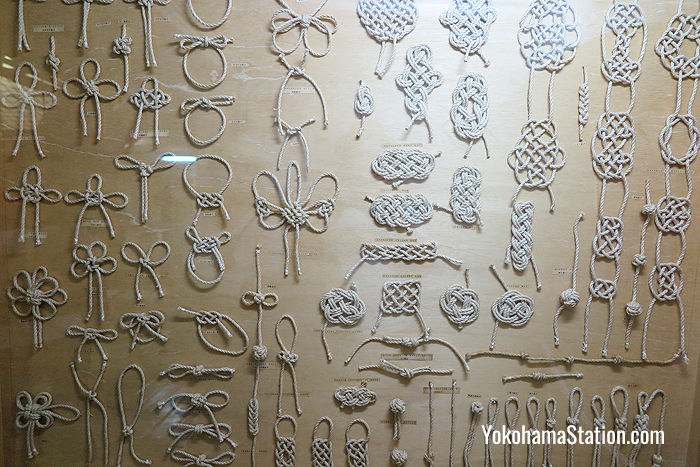 A display of boatman’s knots

There are a variety of ropes on board the ship that serve different purposes and must be tied in different ways. Mastering the various knots was an essential skill for a sailor. However, tying knots also developed into a handicraft pastime: belts, mats, and decorative ornaments could all be made by a skilled sailor. 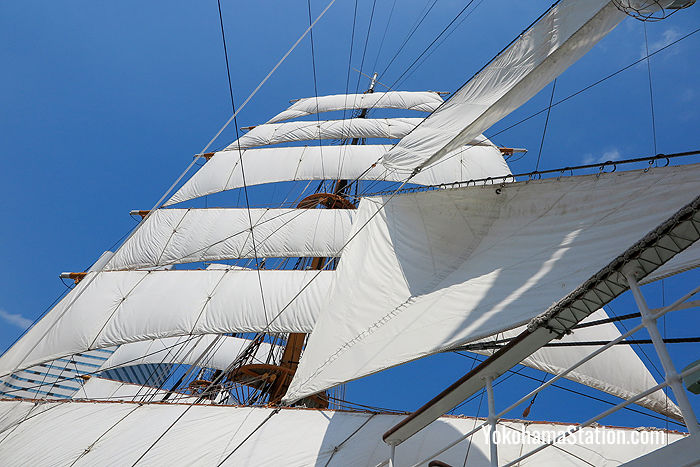 As well as being open all year round as a museum, the ship is also used to give students marine educational experiences, and there are regular displays of all the ship’s sails unfurled. The sails are all unfolded manually by a team of volunteers and it takes 100 people to do this each time. 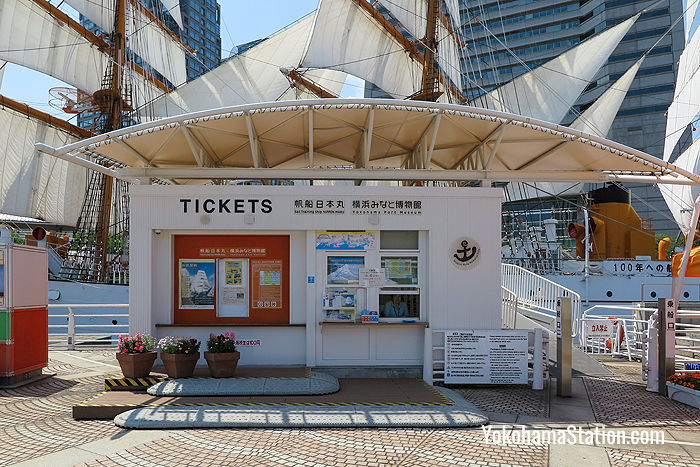 The Ticket Office outside the Nippon Maru

The Nippon Maru is docked directly in front of Yokohama Port Museum. These two attractions can be visited separately, or you can buy a combination ticket which covers the cost of both. Exploring the Nippon Maru can take between 40 minutes to an hour depending on how much attention you pay to the information displayed throughout the ship. Information on board the ship is given in both Japanese and English.

Opening Hours: 10.00 – 17.00 (Last entry at 16.30)
Closed on Mondays or on the following day if Monday is a national holiday. Also closed for year-end holidays and for occasional maintenance. 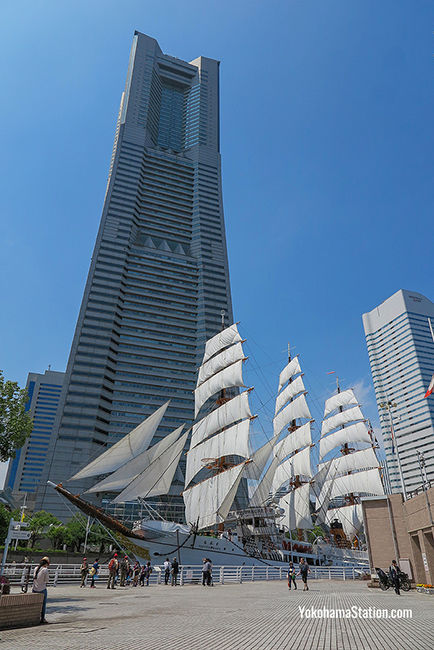 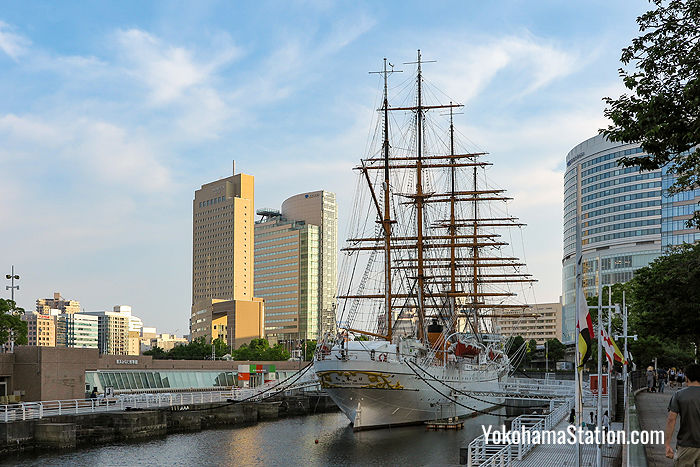 The Nippon Maru with sails folded