The Hikawa Maru is a museum ship which is permanently docked beside Yamashita Park in Yokohama. Built in 1929, this luxury ocean liner carried passengers across the Pacific Ocean in fine style, gaining a reputation for elegant service and gourmet cuisine that earned it the title “Queen of the Pacific”. Among the ship’s more prominent passengers were Charles Chaplin in 1932 and their Imperial Highnesses Prince and Princess Chichibu in 1937. 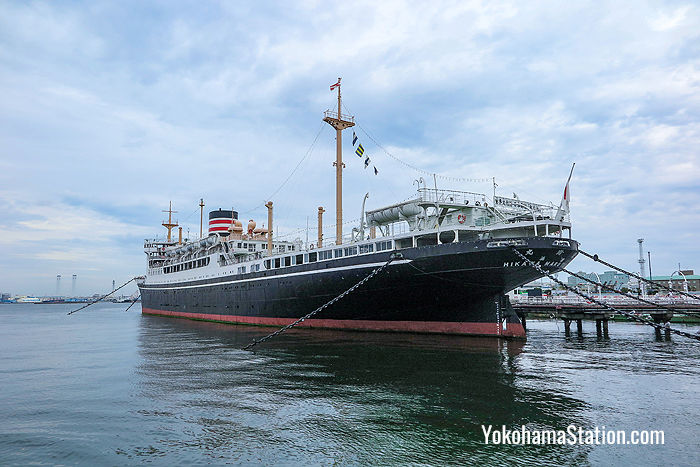 Today you can view the restored passenger quarters which are notable for their art deco interiors and imagine what it was like to travel across the sea almost a century ago. This is the only surviving cargo-passenger liner that was built in Japan before World War II and is now a nationally designated Important Cultural Property.

Built as an ocean liner of the N.Y.K. Line (Nippon Yusen Kaisha or “Japan Shipping Company”) the Hikawa Maru was first launched in September 1929 and made her maiden voyage from Kobe to Seattle in May 1930. After that the ship ran a regular route between Yokohama and Seattle, making 73 voyages before the outbreak of the Pacific War in 1941. 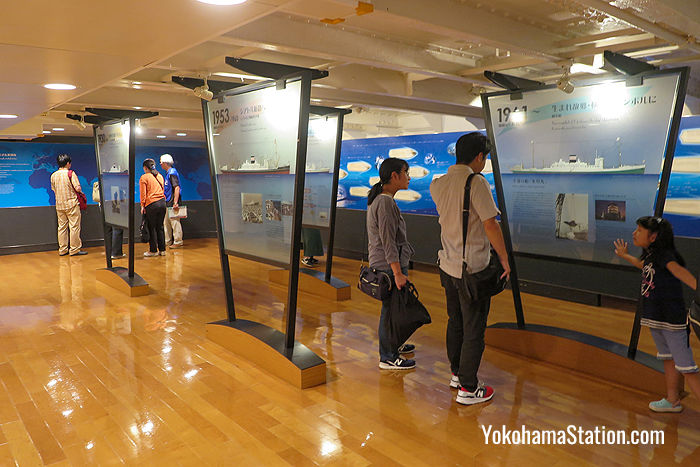 In 1941 she was converted into a hospital ship for use by the Japanese Navy in World War 2. During this time she was damaged by mines on three occasions, but thanks to her thick steel plating she did not sink. In fact, the Hikawa Maru was one of only two large Japanese passenger ships that survived the war. After the war she was used for 2 years to bring Japanese troops and civilians home to Japan and then for another 6 years as a cargo ship. It was not until 1953 that she resumed service transporting passengers and cargo between Japan and Seattle. Finally retired in 1960, the Hikawa Maru had crossed the Pacific 254 times and carried a total of 25,000 passengers over a 30 year period. 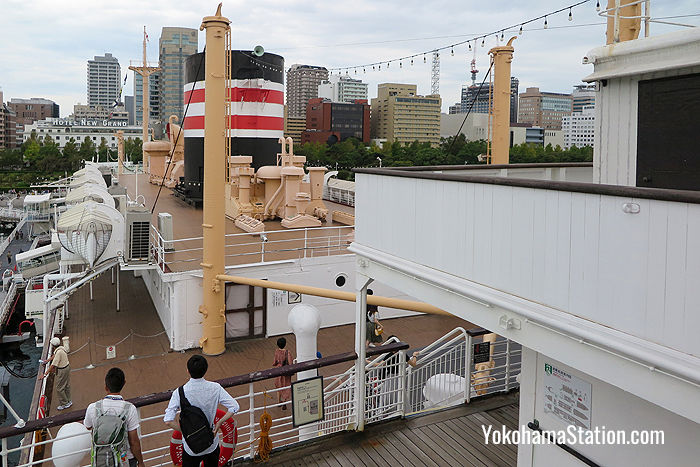 A view of the upper decks

Once aboard the ship visitors are free to take a self-guided tour of the ships four interior decks and three upper levels. In the entrance lobby is a video presentation on the history of the Hikawa Maru. 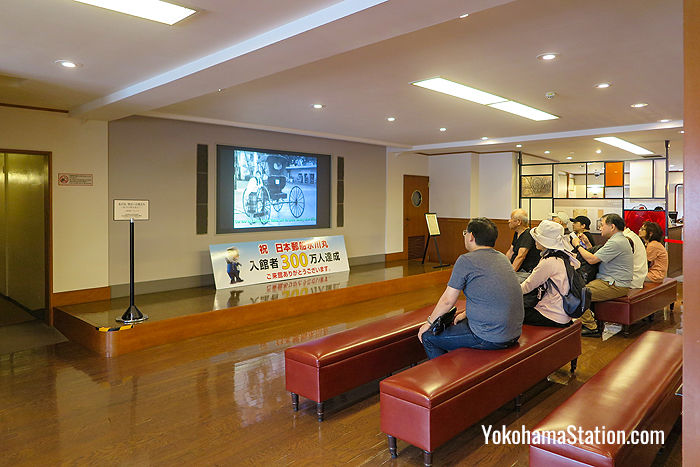 Beyond that you will soon find yourself exploring the first class passenger quarters. 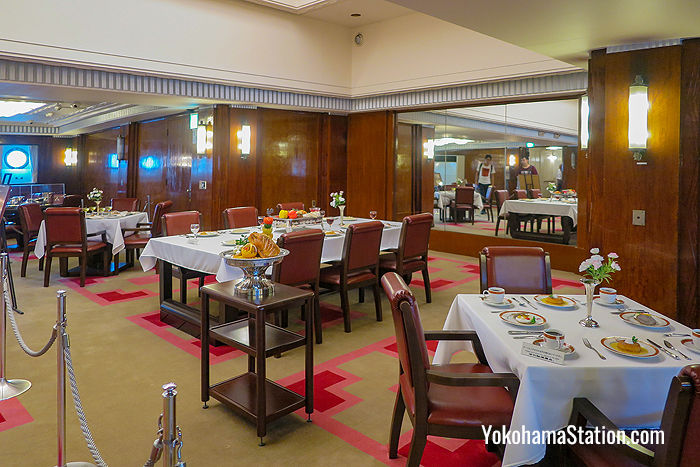 In 1930 a first class ticket on the Hikawa Maru from Yokohama to Seattle would have cost 500 yen. In those days, that was a lot of money as it would cost 1,000 yen to build a house. 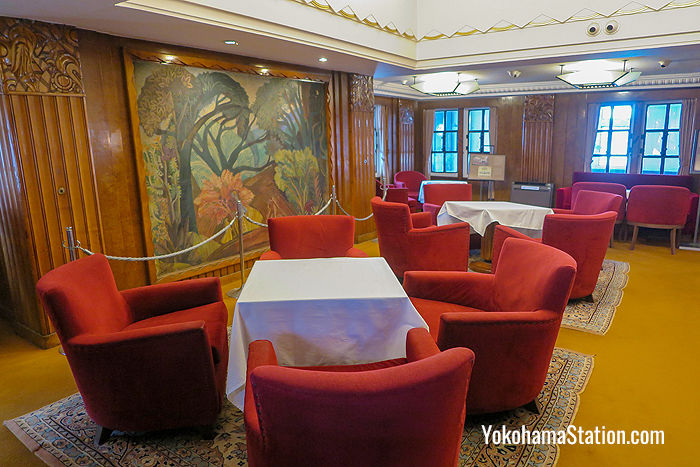 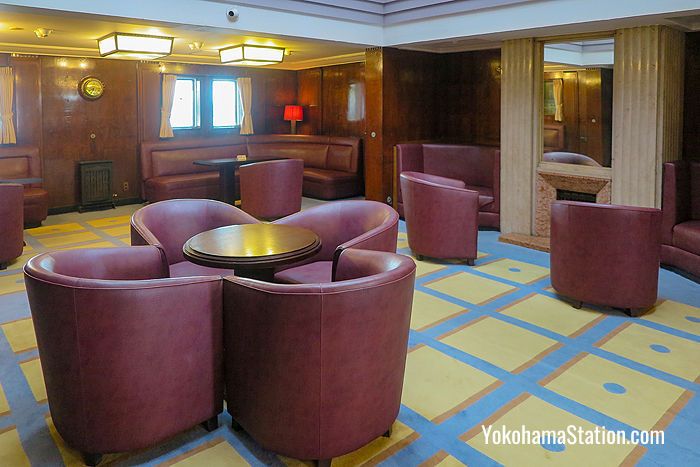 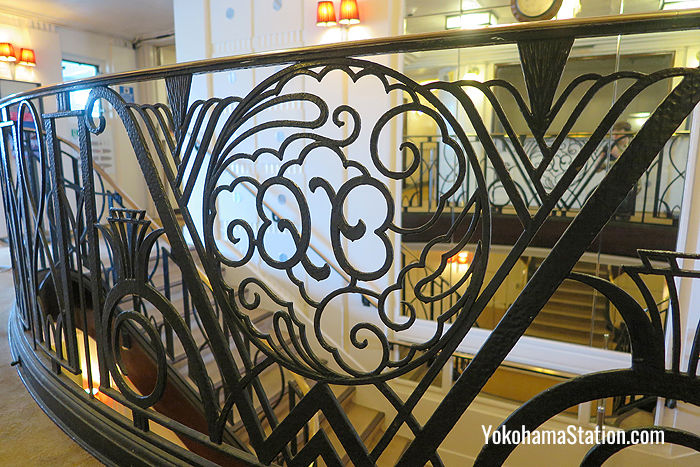 The yakumo motif on the central stairwell

The ship was named after the ancient Hikawa Shrine in Omiya ward, Saitama City. A stairwell between decks is decorated with a yakumo or “eight clouds” motif which represents Hikawa Shrine. 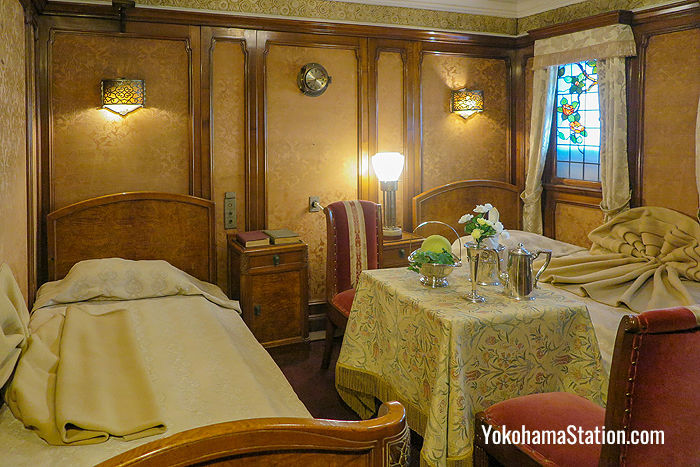 The Deluxe Cabin is a VIP suite that was used by both celebrities and royalty. Charlie Chaplin stayed in this suite during his 1932 trip. 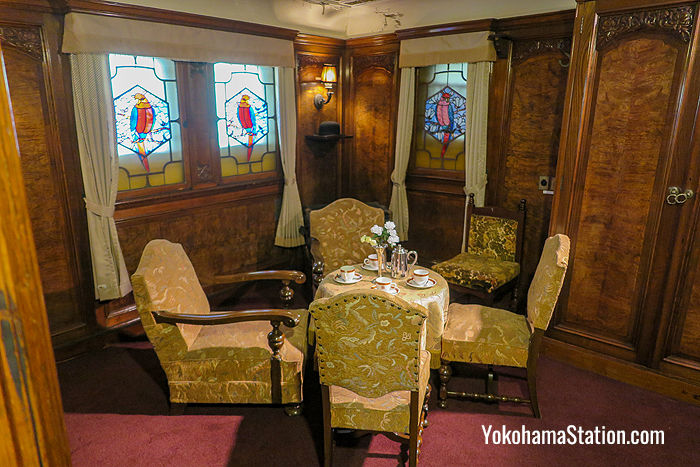 Such spacious facilities form a striking contrast with the third class cabins which are located on a separate deck. There was no mixing between the classes during the journey. 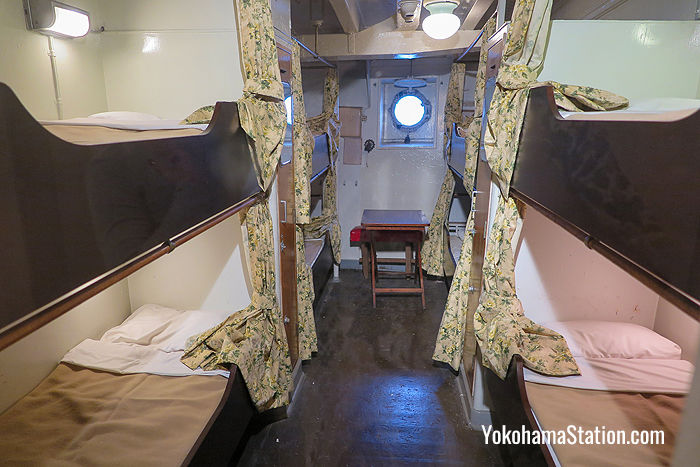 The “Voyage to Seattle” exhibition area shows images and antique objects that bring to life the experience of a Pacific voyage in the 1930s. The trip took 13 days on a route that was infamous for its stormy seas! 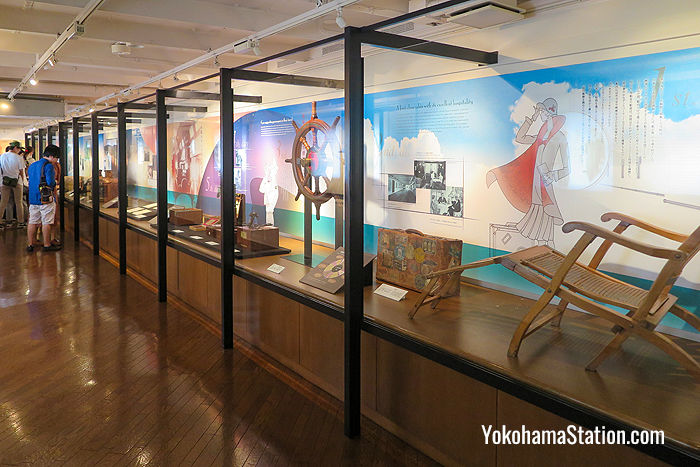 The “Voyage to Seattle” exhibition area

After arriving in Seattle passengers could transfer to the Great Northern Railway and take a 70 hour train journey to Chicago. In this way Seattle prospered as a major relay point between the Far East and the east coast of America. 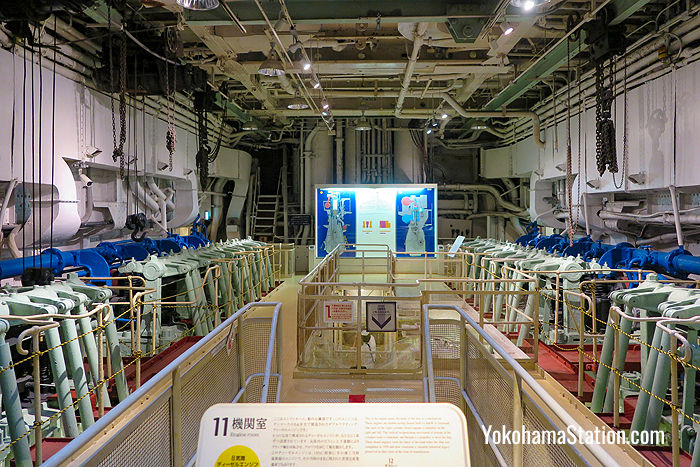 In addition to the passenger quarters, visitors can also view the ship’s engine room and the wheelhouse. 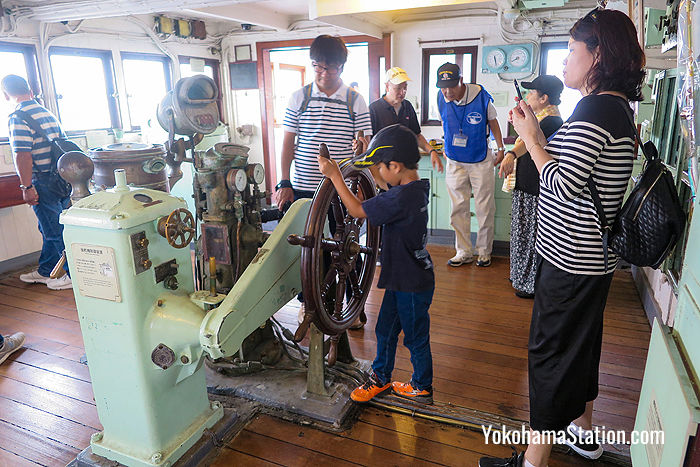 The wheelhouse would have been staffed 24 hours a day as it was the main headquarters of the ship. 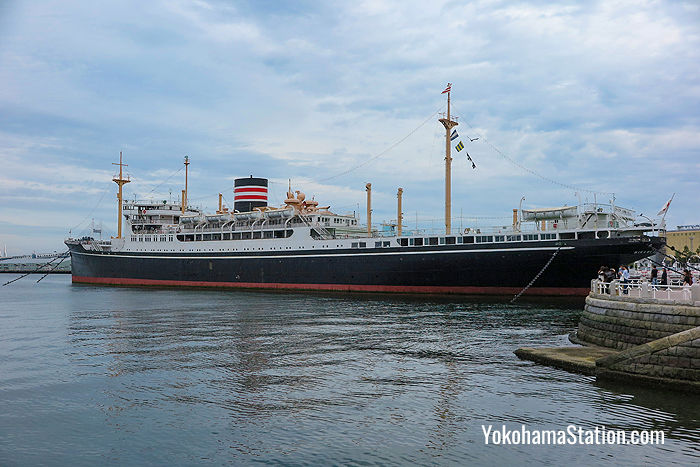 The Hikawa Maru at its final mooring beside Yamashita Park

Opening Hours: 9.00 – 17.00 (Last entry 16.30)
Closed on Mondays (unless Monday is a national holiday in which case it will close the following day instead) 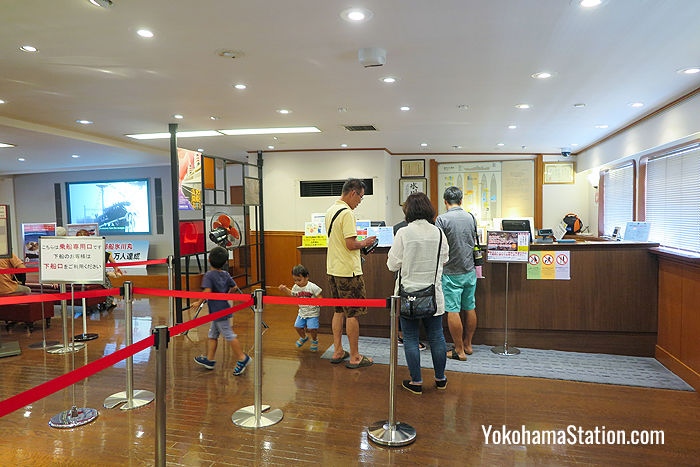 Combination tickets are also available which include both this ship and the NYK Maritime Museum.