The Tokyu Toyoko Line is a railway line that runs between Shibuya Station in Tokyo and Yokohama Station. This line connects Yokohama with some of the most fashionable areas of Tokyo such as Jiyugaoka, Nakameguro, Daikanyama, and Shibuya. Northbound through services on this line continue beyond Shibuya Station on the Tokyo Metro Fukutoshin Line, the Tobu Tojo Line, and the Seibu Ikebukuro Line to destinations such as Shinrinkoen Station and Hanno Station. Southbound through services continue beyond Yokohama Station on the Minatomirai Line as far as Motomachi-Chukagai Station. As all of these lines are operated by private railway companies they are not covered by the Japan Rail Pass. 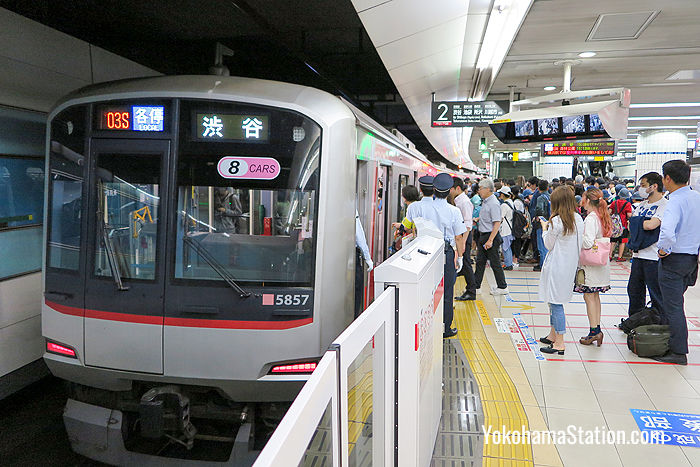 A Local Train bound for Shibuya at Yokohama Station

Because the Tokyu Toyoko Line and Minatomirai Line connect at Yokohama, the two lines share an underground station in the basement of the Yokohama Station building. This station is located to the west of the JR East platforms, with ticket machines and gates on the B3 level and two platforms on the B5 level. Southbound services on the Minatomirai Line depart from Platform 1 and northbound services on the Tokyu Toyoko Line depart from Platform 2. 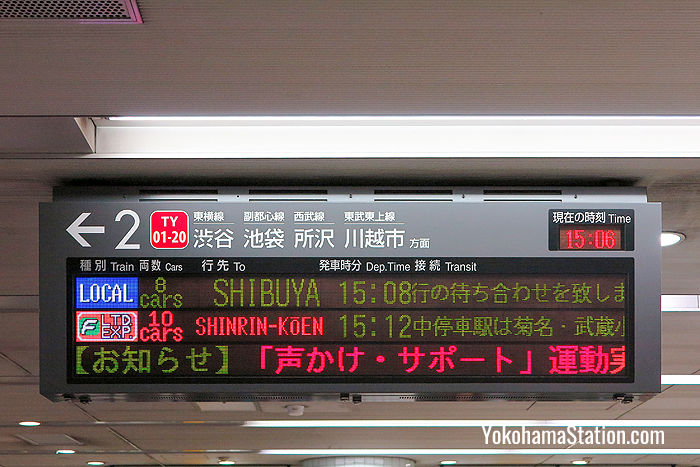 Departure information for the Tokyu Toyoko Line at Yokohama Station

There are 21 stations on the Tokyu Toyoko Line.

The key destinations are listed below with example fares and journey times given from Yokohama Station.

This station is convenient for the Hiyoshi Campus of Keio University. Transfer here to the Tokyu Meguro Line and Yokohama Municipal Subway’s Green Line.

Jiyugaoka is a fashionable residential area in Tokyo which is popular for its clothing boutiques, craft shops, interior goods stores, tasty bakeries, and cozy cafes. Popular locations are the traditional wooden teahouse Kosoan, the many confectionary and pastry shops in Sweets Forest, the Venetian-style canal and gondola at La Vita, the 800-year-old Jiyugaoka Kumano Shrine, and the spacious and leafy grounds of Joshinji Temple.

This station is named after nearby Yutenji Temple which is over 300 years old and famous for its cherry trees. Several of the temple buildings are nationally designated Tangible Cultural Properties. Also nearby is the Accessory Museum which exhibits a large private collection of costume jewelry and other fashionable items.

The Nakameguro area is popular in the spring for the cherry-tree lined Meguro River Promenade. This is also a popular residential district with many fashion boutiques, cafes, restaurants, book stores, and art galleries. Just 3 minutes from the station is the Sato Sakura Museum which exhibits contemporary Japanese paintings. A 15 minute walk south of the station will take you to the Museum of Contemporary Sculpture which has a diverse collection of pieces exhibited both inside and outside the museum building.

Daikanyama is a stylish neighborhood with many high-end clothing stores, cafes, art galleries, cocktail bars, pastry shops, and delicatessens. A five minute walk from the station is Kyu-Asakusa House, a wooden residence and now a museum built in 1919 which has beautiful gardens and is a nationally registered Important Cultural Property.

Shibuya is one of Tokyo’s major entertainment and commercial centers and it is packed with department stores, fashion boutiques, restaurants, night clubs and bars. Just outside the station is the famous statue of a loyal dog called Hachiko which is a popular meeting point. Beyond the statue is the world-famous Shibuya Crossing intersection which is surrounded by giant video screens and neon-lit signs. 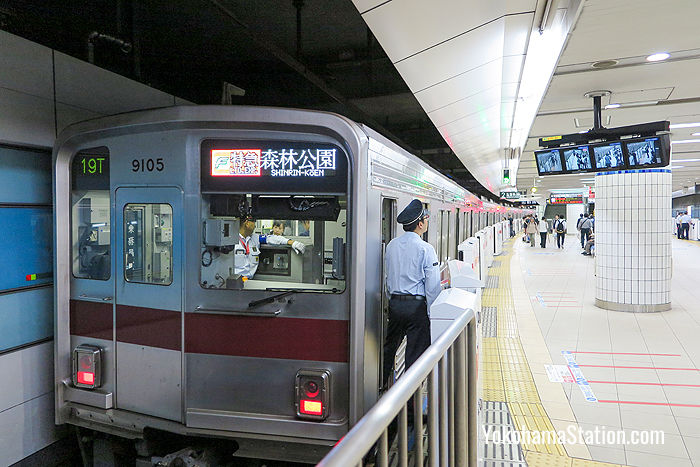 This line has a mixture of local, express, and limited express services. Local trains stop at all stations, while limited express trains provide a much faster link between the major stops on the route. There is no extra charge to ride limited express trains on this route and no reservations are necessary. Through trains such as the F Liner and the S-Train also serve destinations on other rail lines beyond Shibuya such as Ikebukuro, Nerima, and Tokorozawa. However, the S-Train only runs from Yokohama on weekends and it does require a reservation. 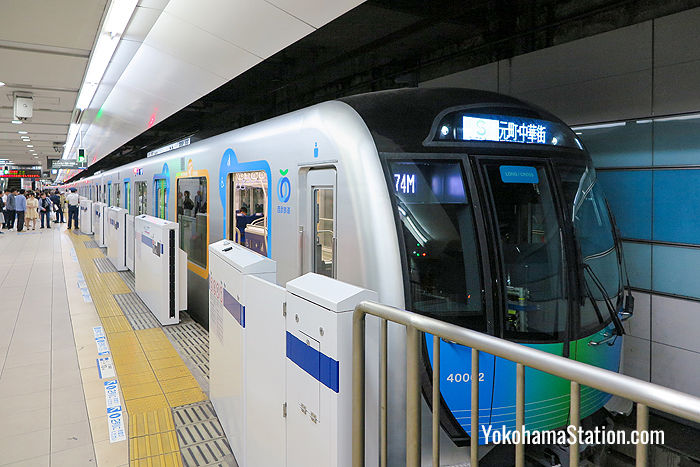 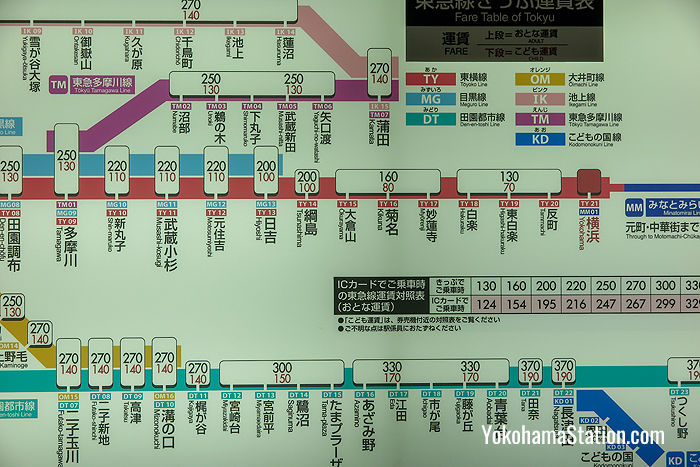 A detail from a fare chart

The ticket machines are easily operated using touch screens which have language options in English, Chinese, Korean, French, and Spanish. 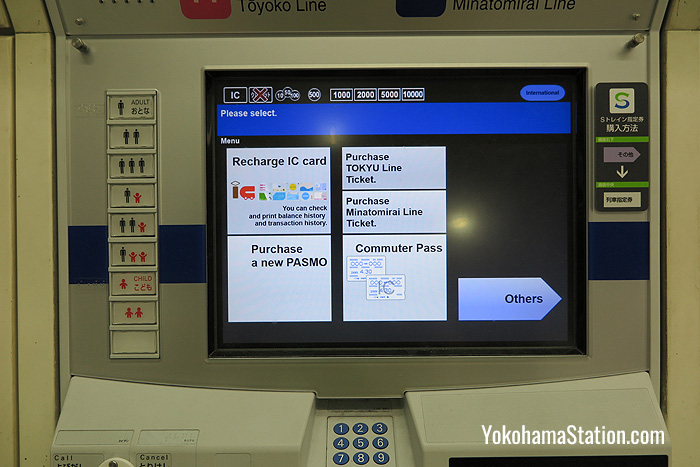 The official Tokyu English language website has more detailed information on this route with maps for individual stations. To plan a journey on these lines we recommend English language route finders like the Japan Transit Planner or Hyperdia.