The Sotetsu Main Line is a private railway line in Kanagawa Prefecture that runs between Yokohama Station and Ebina Station. This railway line links the cities of Yokohama, Yamato, and Ebina. There are also through services bound for Shonandai Station in Fujisawa City that are diverted onto the Sotetsu Izumino Line at Futamatagawa Station. 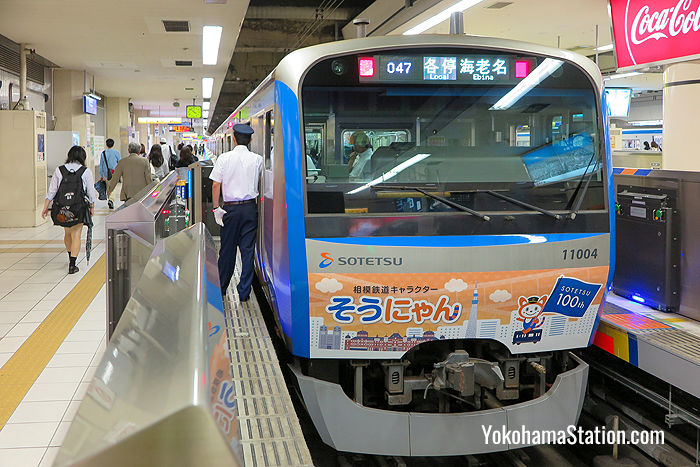 Sotetsu Yokohama Station is located on the west side of the Yokohama Station building with ticket gates on the 1st and 2nd floors. There are three platforms. Platform 1 is for local services and Platforms 2 and 3 are for Rapid, Express, and Limited Express services. All platforms have services bound for Ebina and Shonandai.

The Sotetsu Main Line and Sotetsu Izumino Line are run by the private company Sagami Railway (also called Sotetsu) and so these lines are not covered by the Japan Rail Pass. 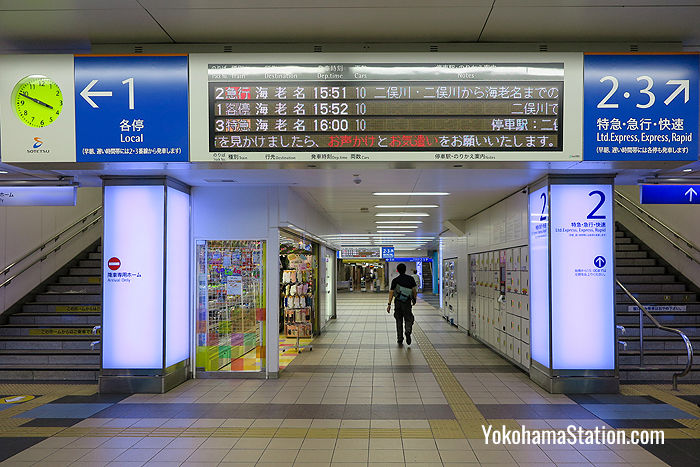 Stairs leading to platforms 1, 2 and 3 at Sotetsu Yokohama Station

There are 18 stations on the Sotetsu Main Line.

The key destinations for both of these lines are listed below with example fares and travel times. 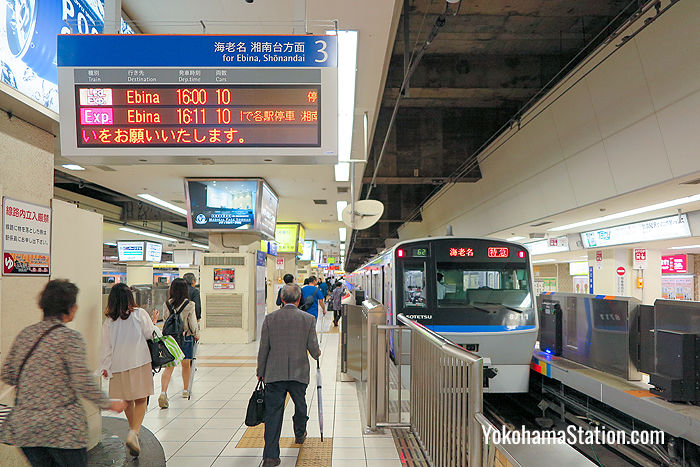 Exit here for the Bunshin Tattoo Museum which explores the culture and history of traditional Japanese tattoos from prehistory to contemporary times. The museum is a 4 minute walk from the station. Yokohama English Garden is also a 10 minute walk to the south of this station. This famous rose garden features 1,800 rose varieties as well as other seasonal blooms.

Exit here for Manten-no-yu natural hot spring bathing facility. This is a large public bathhouse in an attractive Edo era style building with a great range of indoor and outdoor baths including electric baths, jacuzzis, herbal baths, mint baths, as well as water, steam and salt saunas. There is also a restaurant on site serving simple snacks, noodles, and set meals. Manten-no-yu is a 1 minute walk from Kamihoshikawa Station.

Regular bus services to Yokohama Municipal Zoo (also called “Zoorasia”) run from bus stop 9 outside the north exit of Tsurugamine Station. Animals such as Amur leopards, African elephants, Sumatran tigers, polar bears, and red pandas are kept in enclosures that resemble their natural environments. Pony and camel rides are also available for children. The bus from Tsurugamine Station takes about 16 minutes to reach the zoo.

Transfer here to the Odakyu Enoshima Line with services bound for Fujisawa and Shinjuku.

This station is convenient for Izumi-no-Mori Park. Here you can view a variety of natural habitats such as woodland, grassland with wild flowers, and a large pond with diverse aquatic plants. The park also contains a working water mill, a long bridge from which to view the scenery, and two restored 19th century thatched residences called minka. The park is a 7 minute walk from the station.

This station is close to Sagami Kokubunji Temple. This Shingon Buddhist temple was founded in the 8th century and the remains of its original buildings are a National Historic Site. The temple bell dates from the Kamakura era (1185-1333) and is a nationally designated Important Cultural Property.

This is the last station on the Sotetsu Main Line. Transfer here to the Odakyu Odawara Line. 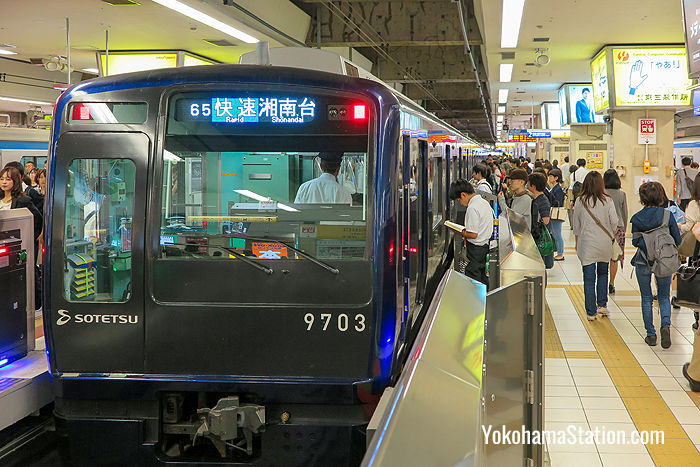 Shonandai Station is the last stop on the Sotetsu Izumino Line which branches off from the Sotetsu Main Line at Futamatagawa Station. Shonandai Station serves the northern part of Fujisawa City which is a popular location for its beaches, summer fireworks displays, and for its easy access to the island of Enoshima. However, to reach these popular tourist locations you should transfer at Shonandai Station to the Odakyu Enoshima Line. This station is also the southern terminus of Yokohama Municipal Subway’s Blue Line.

Tickets can be bought from the automatic ticket machines which are located beside the ticket gates at each station. 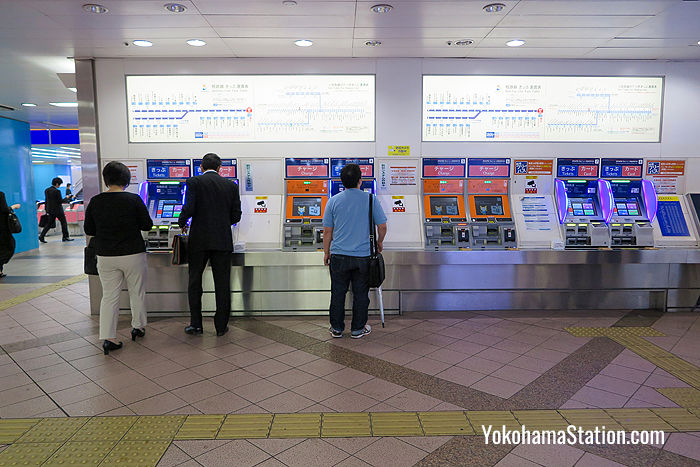 Fare tables with destinations written in both English and Japanese are located above the ticket machines. 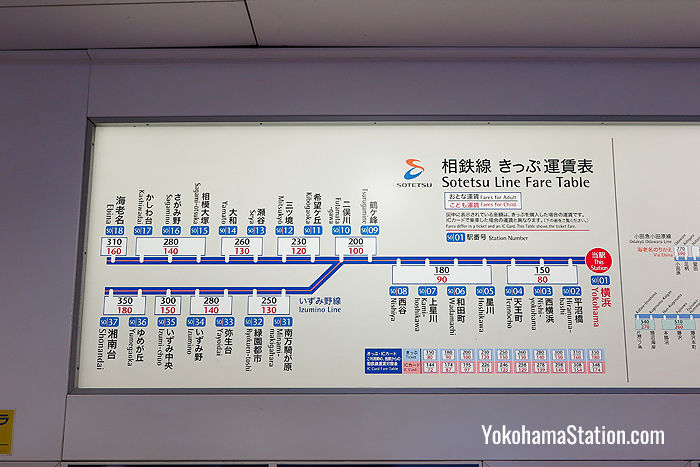 Ticket machines are operated by touch screens which have language options in English, Chinese, and Korean. 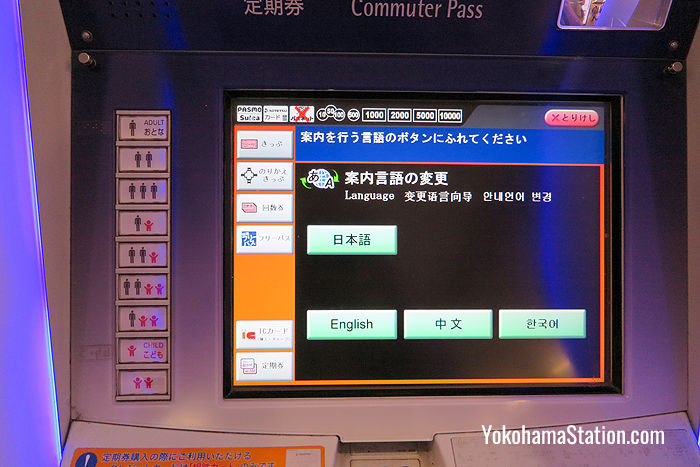 Sotetsu also accepts prepaid PASMO IC cards for automatic payment and these can also be bought or recharged at the automatic ticket machines. Using the PASMO card enables you to move quickly through ticket gates as you don’t need to stop to buy tickets. In addition the fares are slightly cheaper if you use PASMO. Other regional IC cards which are inter-operable with PASMO such as SUICA or ICOCA can also be used on this network.

Further details of how to use these lines, with information on fares, timetables, route maps, and station maps can be found on the official Sotetsu website. To plan your journey quickly and easily, use English language route finders like Hyperdia and the Japan Transit Planner.