The Odoriko and Super View Odoriko are limited express train services that connect destinations in Tokyo and Yokohama with the hot spring resorts of the Izu Peninsula. The trains are named after a famous short story by Yasunari Kawabata called “Izu no Odoriko” or “The Dancing Girl of Izu”. The main difference between the two trains is that the Super View Odoriko has a more sleek appearance and offers more luxurious seating and larger windows. The Super View Odoriko also makes fewer stops but is slightly more expensive than the Odoriko. 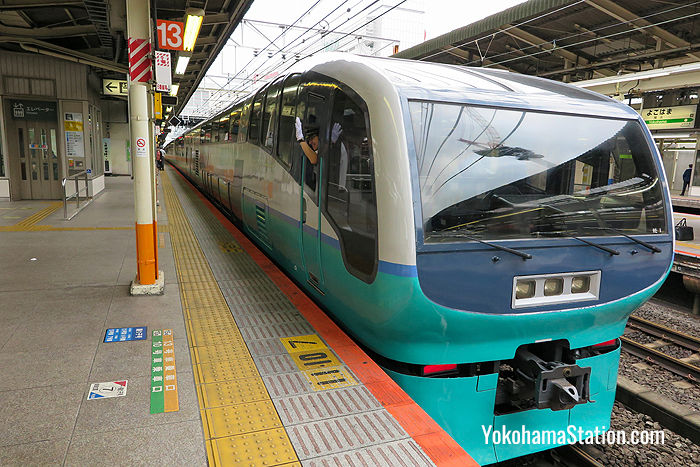 Most regular services run between Tokyo Station and Izukyu-Shimoda Station, and between Tokyo Station and Shuzenji Station. These services are operated by JR East, but run on private railway lines for some parts of their routes. For this reason they are only partially covered by the Japan Rail Pass. At Yokohama Station the Odoriko and Super View Odoriko depart from platforms 5 and 6.

All Super View Odoriko services serve Izukyu-Shimoda with most running on the following regular route. The stations in brackets () below are not served by all trains.

There is also one service that runs from Shinjuku Station to Izukyu-Shimoda Station on weekdays and from Ikebukuro on weekends. This train stops at the following stations before continuing on the regular route to Izukyu-Shimoda. 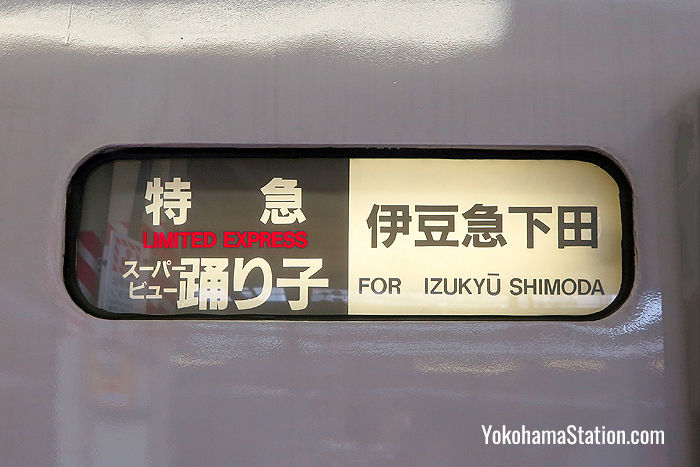 A carriage banner on the Super View Odoriko

The key resort destinations are listed below. Example journey times and train fares for the Odoriko and Super View Odoriko are given from Yokohama.

Yugawara is a coastal hot spring resort town in Kanagawa Prefecture with some interesting museums and historic sites. Just ten minutes from the station is the historic Joganji Temple which was first founded by local warlord Sanehira Doi in the 12th century. The temple is home to the tombs of the Doi clan and an 800-year-old juniper tree which is a registered Natural Treasure. Fukusenji Temple is famous for its giant ceramic Buddha head. Yugawara Art Museum exhibits watercolors, oil paintings, and ukiyo-e prints by Japanese artists such as Shinsui Ito, Sotaro Yasui, and Takeuchi Seiho. The Kabocha Museum exhibits works by contemporary artist Yayoi Kusama. Manyo Park is a botanical garden featuring plants from the Man’yoshu poetry collection, walking trails, waterfalls, and a hot spring footbath called “Doppo no Yu”. Kumano Shrine which is dedicated to the god of hotsprings is also inside Manyo Park. Yugawara hosts a Yukake Matsuri festival on the 4th Saturday in May in which portable shrines are paraded and splashed with hot spring water.

Transfers can be made here to the Tokaido Main Line.

Atami is a famous seaside resort town on the Izu Peninsula with both high rise luxury hotels, and traditional ryokan style inns. The main attraction in Atami is its hot spring bathing facilities. Other attractions include the Momoyama-style Atami Castle (which was actually built in 1959); the MOA Museum of Art which exhibits paintings, ceramics, sculptures, lacquerware and scrolls from Japan and across Asia; and Atami Ropeway which runs cable cars up to an observation point on top of Mount Hachiman.

Transfers can be made here to the Tokaido Main Line, the Ito Line, or the Tokaido Shinkansen.

Ajiro Onsen is a small scenic fishing port with many traditional hot spring inns. Among the top hotels here, Taseikan is a luxurious ryokan over-looking the ocean which is popular for its outdoor bathing facilities and fine course meals with fresh seafood and seasonal vegetables.

Transfers can be made here to the Ito Line.

Located on Sagami Bay, Ito is one of Japan’s biggest hot spring spa resorts with lots of public bathhouses seafood restaurants, and ryokan inns dating from the early 20th century. A big attraction in central Ito is the Tokaikan, a large traditional wooden hotel building dating from 1928 which now operates as a museum. The town has a lot of historic buildings lining the Matsukawa River, and the riverside walking path is particularly popular during the spring cherry blossom season. On the outskirts of Ito are the dramatic rock formations of the Jogasaki coastline and the cone shaped Mount Omuro. A chairlift carries people up to the summit of Mount Omuro and from the top you can enjoy gorgeous views of the sea and surrounding landscape. To get to the Jogasaki coastline take the Izu Kyuko Line from Ito Station to Jogasaki-Kaigan Station. The train takes about 18 minutes. Mount Omuro is a 40 minute bus ride from Ito Station.

Transfers can be made at Ito Station to the Ito Line or the Izu Kyuko Line.

Izu-Kogen is a small resort town located at the southern end of the Jogasaki coastline with many inns, museums, and art galleries. These include the Antique Jewellery Museum, the nostalgic Showa era displays of the Omoshiro Historical Museum, the Chinese Ceramics and Glass Museum, Atelier Rocky Kaleidoscopes Gallery, and the mechanical toys of Nosaka Automata Museum.

Transfers can be made here to the Izu Kyuko Line.

This station serves the spa town of Atagawa Onsen. The big attraction here is the Atagawa Tropical & Alligator Garden which uses hot spring waters to heat its green houses and reptile enclosures.

This station serves the resort town of Inatori Onsen which is famous for its cliff-top inns and open air baths overlooking the sea. Inatori Onsen also holds a colorful Hanging Dolls Festival from late January to the end of March.

Kawazu is another resort town with seven different hot springs dotted along the coast and also in the mountains. Kawazu is famous for its early cherry blossom festival in February and March, and for the Kawazu Nanadaru which are seven beautiful waterfalls along a picturesque forest walking trail. Imaihama Beach is a popular destination in the summer.

This station serves the city of Shimoda which is popular for its hot springs and beaches. Shimoda is also famous as the landing place of the American Admiral Perry whose “Black Ships” opened up Japan to the world in 1854. A replica of one of the black ships, called the Susquehanna, runs sightseeing cruises around the harbor. Ryosenji is a 17th century Buddhist temple where Admiral Perry signed a treaty with the Japanese government and it has a variety of Perry-related items on display in its museum. Uehara Museum of Modern Art exhibits works by Cezanne, Renoir, and Picasso as well as Japanese artists such as Shinsui Ito,and Sotaro Yasui. Shirahama Beach is particularly famous for its white sands and is also popular with surfers.

Izukyu-Shimoda Station is the last stop on the Odoriko’s Tokyo-Izukyu Shimoda route. The following stations are all on the Tokyo-Shuzenji route.

Mishima is a city in Shizuoka Prefecture with a number of attractions including Mishima Taisha Shrine which is believed to date from the Nara Period (710-784), the Heian era (794-1185) Ryutakuji Temple with its Zen garden, the traditional Japanese garden and zoo at Rakuju-en Park, and the Sano Art Museum which exhibits Asian ceramics, bronze artifacts, and also has an impressive sword collection.

Transfer here to the Tokaido Main Line or the Izuhakone Railway Sunzu Line.

Izu-Nagaoka Onsen is a hot spring town with two big attractions. Izu Panorama Park is a mountaintop park reached by a ropeway cable car service from where you can enjoy sweeping views over Mount Fuji, Suruga Bay and Hakone. Nirayama Reverberatory Furnace is a furnace dating from 1855 that was used to cast cannons from iron and it is now a UNESCO World Heritage Site.

Shuzenji Station is located in the city of Izu, and serves the hot spring resort of Shuzenji Onsen. Local attractions include the ancient Shuzenji Temple, the Shigetsuden which is the oldest wooden building in the Izu area, the Toi Gold Mine and Toi Gold Museum, the gardens and the miniature steam railway at Shuzenji Niji-no-Sato amusement park, and the beautiful Joren Falls.

Shuzenji Station is the southern terminus of the Izuhakone Railway Sunzu Line.

The Odoriko and the Super View Odoriko are operated by JR East, but on parts of their routes they run on private railways. Japan Rail Pass holders do not need to pay for the JR East part of the route, but they will need to pay a surcharge for the sections run by private railways. Services running between Tokyo and Izukyu-Shimoda run on the private Izu Kyuko Line between Ito Station and Izukyu-Shimoda Station. Services running between Tokyo and Shuzenji run on the private Izuhakone Railway Sunzu Line between Mishima Station and Shuzenji Station.

There are many irregular Odoriko and Super View Odoriko services running on specific dates that begin at Shinjuku, Ikebukuro, Omiya, or Abiko before continuing on toward Izukyu-Shimoda Station. For the dates and details of these special services please check the current timetables on the JR East website. To plan your trips on these services we recommend English language route finders such as Hyperdia and the Japan Transit Planner.