The Narita Express (N’EX) is a limited express service operated by JR East which provides a fast and direct link between Narita International Airport and a variety of destinations in Tokyo, Kanagawa, and Saitama. From Narita Airport to Tokyo Station the N’EX takes around 54 minutes and to Yokohama around 84 minutes.

The main rival for the Narita Express is the Keisei Skyliner which runs between Narita Airport and Keisei Ueno Station in Tokyo in just 41 minutes. However, the N’EX connects Narita Airport with a greater range of destinations in and around Tokyo without any need for transfers. 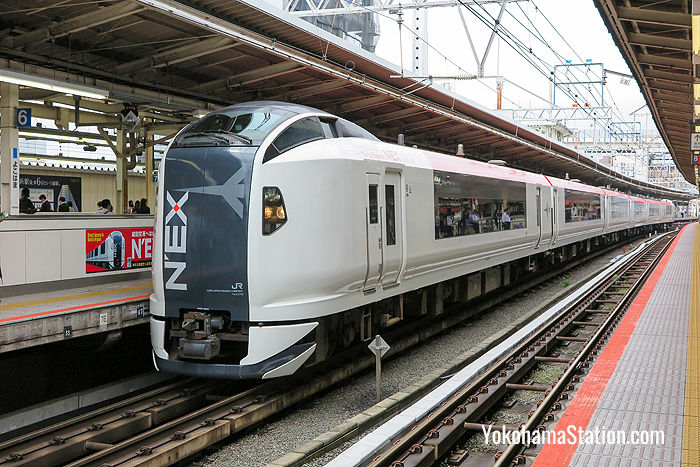 The Narita Express at Yokohama Station 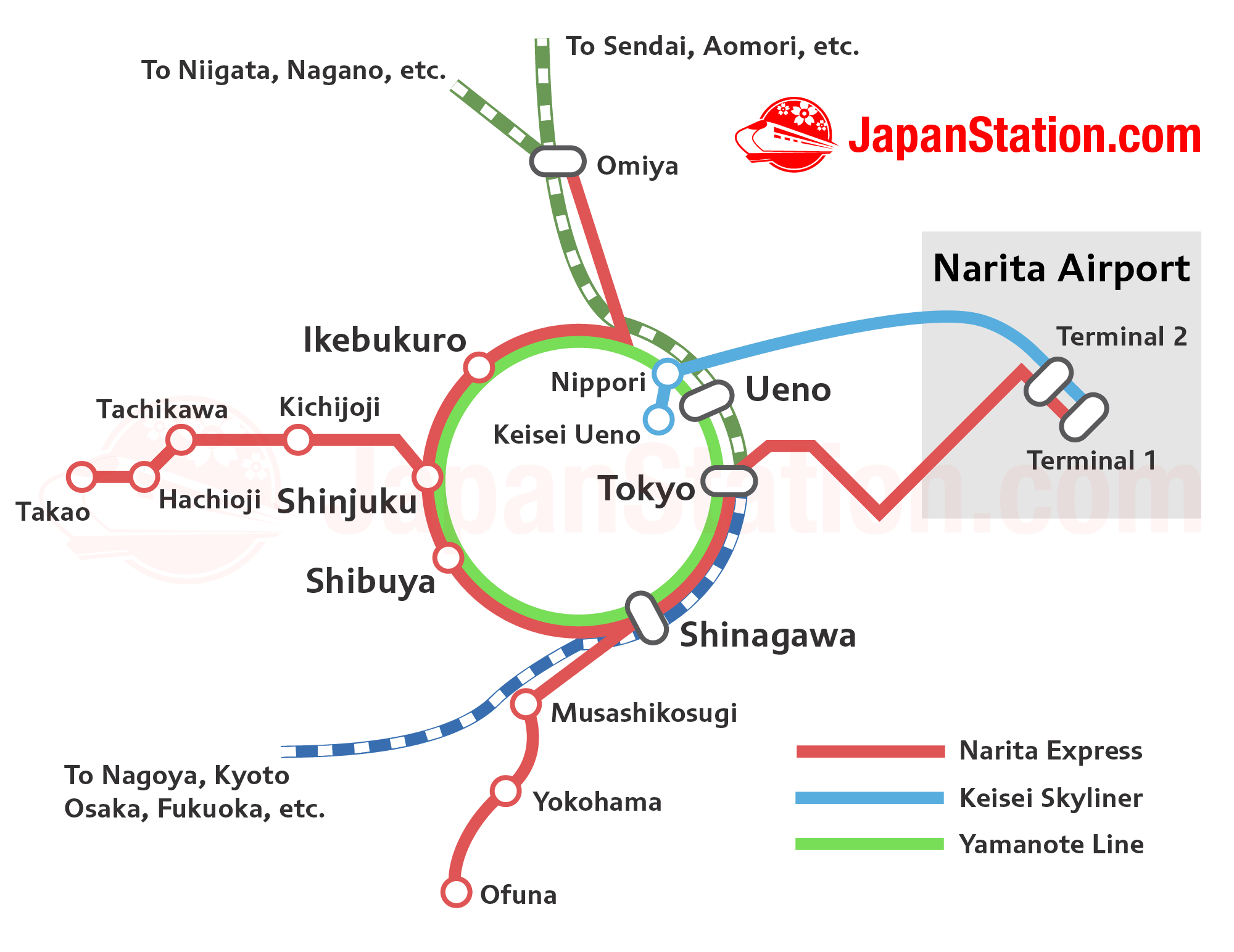 Services running between the airport and Ofuna travel via Yokohama. In this article we will focus on the Ofuna-Yokohama route. There are regular services from Yokohama Station to Narita Airport roughly every hour for most of the day and every 30 minutes between 13.00 and 17.00. At Yokohama Station N’EX services bound for Narita Airport depart from Platform 10 and services bound for Ofuna depart from Platform 9. The N’EX is fully covered by the Japan Rail Pass, but seats must be booked in advance. 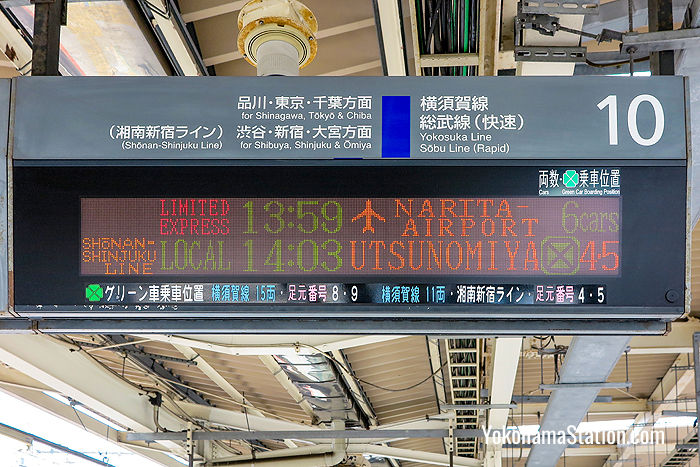 Most N’EX services make just 8 stops between Narita Airport and Ofuna. However, evening rush hour services also stop at the stations in brackets ().

When traveling to Narita Airport be sure to check the appropriate terminal for your flight so that you don’t get off at the wrong station. The key destinations are listed below with example journey times and ordinary fares (including limited express surcharge) given from Narita Airport Terminal 1.

Top attractions near Tokyo Station include the Imperial Palace Gardens and Mitsubishi Ichigokan Museum which exhibits 19th century European art in a Queen Anne style building designed by Josiah Conder. The original red brick façade of Tokyo Station dates from 1914 and is located on the western Marunouchi side of the station building.

There are several attractions near Shinagawa Station. The Nikon Museum has exhibits related to the history and technology of Nikon cameras and other products. The Hara Museum is an arts and design museum housed in a Bauhaus building dating from 1938. The Jade Ore Museum is a private gallery with a large collection of jade stones both carved and uncarved, some of which are for sale. Hatakeyama Memorial Museum of Fine Art exhibits a fine collection of Chinese, Korean, and Japanese art works related to the tea ceremony. The tombs of the legendary 47 Ronin are located at Sengakuji Temple. These heroic samurai are famous for their loyalty to their master and there is a festival held here to honour them every December 14th..

Transfers can be made at Shinagawa Station to the Yamanote Line, the Tokaido Main Line, and the Tokaido Shinkansen.

Musashi-Kosugi Station is located in Kawasaki City. Attractions in Kawasaki include Kawasaki Daishi Temple with its rare octagonal five-storied pagoda, the outdoor architectural museum of Japan Open-Air Folk House Museum (Nihon Minka-en), the Taro Okamoto Museum of Art, the Toshiba Science Museum, and the Fujiko F. Fujio Museum which is dedicated to the artists who created the Doraemon manga series.
Transfers can be made at Musashi-Kosugi Station to JR East’s Nambu Line, Yokosuka Line, and Shonan-Shinjuku Line. Transfers can also be made to the Tokyu Meguro Line and the Tokyu Toyoko Line.

Yokohama Station is located in a shoppers’ paradise with many department stores and shopping malls located in and around the station including Takashimaya, Lumine, and Yodobashi Camera. Tourist attractions include Hara Model Railway Museum, and Sogo Museum of Art which is located on the 6th floor of Sogo department store. Bay Quarter Yokohama is a bright, contemporary commercial complex with excellent waterfront dining facilities which can be reached via the station’s Northeast and East exits.

Yokohama Station is a busy interchange station with several railway lines operated by JR East and private rail companies, as well as local and highway bus services. JR East’s Negishi Line can be used to access Yokohama’s main sightseeing locations around Minato Mirai, Chinatown and Yamate. These areas are also served by the Minatomirai Line and Yokohama Municipal Subway’s Blue Line. The Subway’s Blue Line and JR’s Yokohama Line also link Yokohama Station to the Tokaido Shinkansen terminal at Shin-Yokohama Station. Other transfers can be made to JR East’s Yokosuka Line, Shonan-Shinjuku Line, and Tokaido Line, and to the Tokyu Toyoko Line, the Keikyu Main Line, the Sotetsu Main Line. Local and highway bus services depart from Yokohama City Air Terminal (YCAT) which can be found on the 1st floor of Yokohama Sky Building on the station’s east side.

Ofuna Station is located in Kamakura, a popular seaside town with many historical shrines and temples. Just a short walk from the station is Ofuna Kannon Temple which is famous for its 25 meter high statue of Kannon, the goddess of mercy. This station is also convenient for Josenji Temple and the Taya Caves. The ancient meditation caves were dug into a limestone hill by the temple monks and decorated inside with Buddhist carvings. Both the temple and caves are a 14 minute bus ride from the west exit of Ofuna Station. 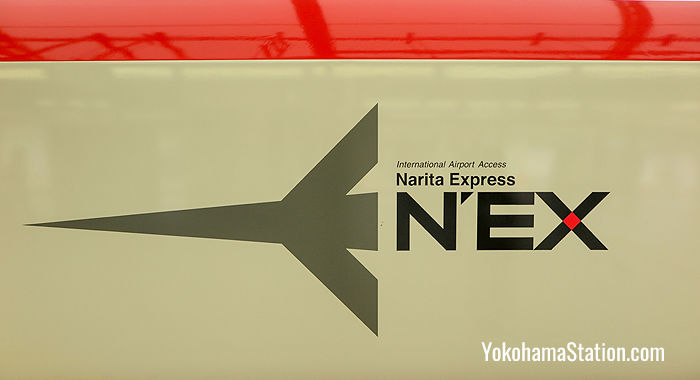 The NE’X logo on the body of the train

All seats on board the Narita Express are reclinable with adjustable headrests. Each seat also has its own table and power outlet. Onboard facilities include luggage storage areas with security cameras close to the doors, large barrier-free restrooms, and large flat-screen monitors with information on destinations and flights given in multiple languages. Passenger announcements are also given in several languages.

As the Narita Express is a limited express service you need to buy both a fare ticket and a limited express seating ticket and seats must be reserved in advance. Tickets can be purchased at the Narita Airport stations, JR station ticket offices, View Plaza Travel Service Centers, and from ticket machines in JR stations. Both ordinary tickets and Green Car (1st Class) tickets are available. Green Cars are slightly more luxurious with carpeted floors, leather seats, and a little more space to stretch out in. The cost of an ordinary ticket (including limited express surcharge) between Narita Airport and Yokohama Station is 4,370 yen and for a Green Car it is 5,940 yen. Ordinary tickets are covered by the Japan Rail Pass, but you will still need to reserve your seat in advance.

For overseas passengers who do not have a Japan Rail Pass, the N’EX Tokyo Round Trip Ticket is a good option as it saves around 33% on regular round-trip fares. The ticket is valid for 14 days between the Narita Airport stations and major stations in the Tokyo metropolitan area (which includes Yokohama and Ofuna) and it can be bought immediately after arrival at Narita Airport. For further details please see the official JR East webpage. 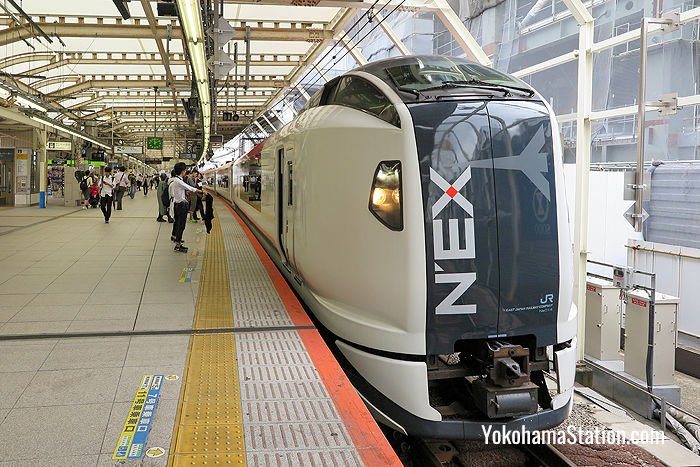 JR East have an official Narita Express webpage with detailed information on timetables and booking tickets. To plan transfers between the Narita Express and other rail services we recommend online English language route finders such as Hyperdia and Japan Transit Planner.