The Keihin-Tohoku Line is a railway line operated by JR East that runs between Yokohama Station in Kanagawa Prefecture and Omiya Station in Saitama Prefecture. The line passes through Tokyo on the way between these destinations and within Tokyo it runs parallel to the Yamanote Line for a large part of its route. 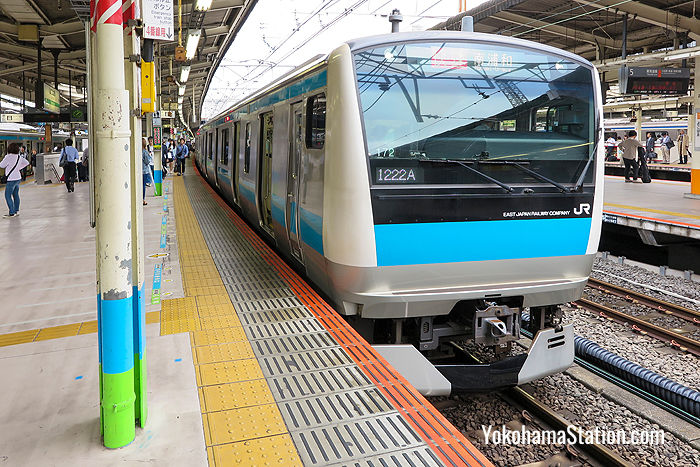 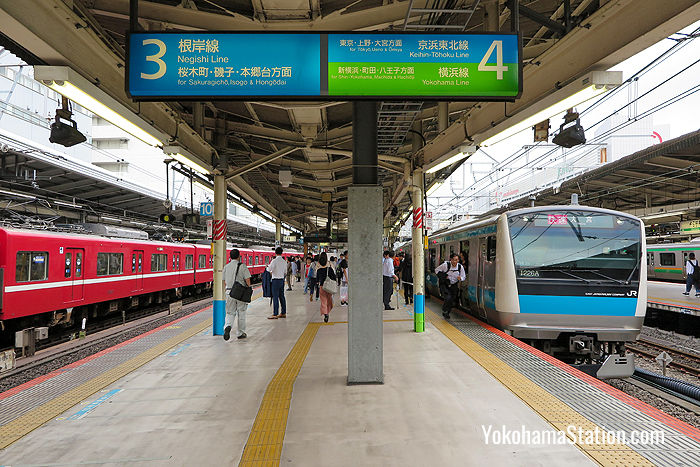 Platforms 3 and 4 at Yokohama Station

There are 35 stations on the Keihin-Tohoku Line.

The key destinations on the Keihin-Tohoku are listed below with fares and example journey times given from Yokohama Station. 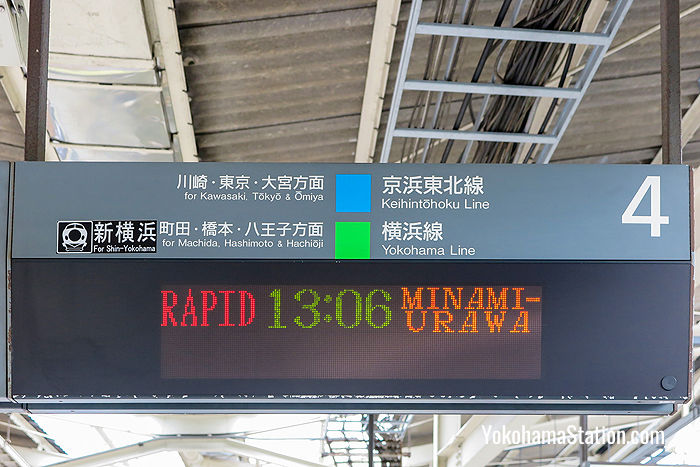 Sojiji Temple is a major Zen temple near Tsurumi Station. First founded in the year 740 in Ishikawa Prefecture, the temple was moved here in 1911 after a fire destroyed the original buildings. Temple tours with monks as guides or English language Zazen meditation sessions are both available here. The temple is a 7 minute walk west of the station.

Kawasaki is mainly an industrial city, but it has a number of attractions. Kawasaki Daishi is a popular temple complex dating from 1128. Japan Open Air Folk House Museum (Nihon Minka-en) is an architectural park with many traditional thatched minka farm houses. The Fujiko F. Fujio Museum is dedicated to the creators of the popular cartoon character Doraemon. Toshiba Science Museum is a free museum of interactive historical and technological displays which is just 5 minutes’ walk from Kawasaki Station.

This station is convenient for Shinagawa Historical Museum. The museum is dedicated to local history and displays archaeological finds from the nearby Omori Shell Mounds. Also on display are exhibits related to the Shinagawa Post Station which was the first stop on the old Tokaido highway that connected Tokyo (then called “Edo”) with Kyoto. Omori Shell Mounds Park is an 8 minutes’ walk north of Omori Station and the museum is a 7 minutes’ walk north of the park.

Exit here for Sengakuji Temple where the legendary 47 Ronin lie buried. These heroic 18th century samurai are famous for their loyalty and a festival is held here every December 14th to celebrate their memory. There are also a large number of museums in this area. The Nikon Museum has many interactive displays detailing the history, technology and design principles of the Nikon company and a “hands-on” section exhibiting rare and valuable cameras. The Hara Museum is housed in a Bauhaus building dating from 1938 and is dedicated to contemporary art, architecture, design, music and dance. The Jade Ore Museum exhibits a large private collection of jade pieces cut and uncut and many of the displayed pieces are for sale. The Hatakeyama Memorial Museum of Fine Art exhibits a collection of Japanese, Chinese, and Korean art related to the tea ceremony.

Transfers at Shinagawa Station to the JR Yamanote Line, the JR Yokosuka Line, the JR Tokaido Line, the Tokaido Shinkansen, and the Keikyu Main Line.

Exit here for two of Tokyo’s most famous gardens: the Kyu Shiba Rikyu Garden and Hamarikyu Gardens. Also nearby is Zozoji Temple, an impressive Buddhist temple founded in 1393, which holds the tombs of six Tokugawa shoguns. The temple’s main gate dates from 1622 and is Tokyo’s oldest wooden building. Just beyond Zozoji is Tokyo Tower, which at 332.9 meters high is the second tallest structure in Tokyo. Inside the tower are viewing platforms, souvenir shops, cafes, restaurants, and a theme park based on the One Piece manga series.

Shimbashi Station is an important stop for railway enthusiasts. The first Shimbashi Station opened in 1872 as the Tokyo terminus of Japan’s first railway (which ran between Shimbashi and Yokohama). This building has been reconstructed in its original location as Old Shimbashi Station (5 minutes east of the current station building). Inside is a museum with displays of railway history. Outside the west side of the present Shimbashi Station is a popular meeting point called SL Square where is a Class C11 steam locomotive dating from 1945 is on display.

Transfers can be made at Shimbashi Station to the following JR services: the Yamanote Line, the Tokaido Line, and the Yokosuka Line. Transfers can also be made to the Tokyo Metro Ginza Line, the Toei Asakusa Line, and New Transit Yurikamome.

This station is convenient for the convention center and performance venue Tokyo International Forum. Outside the station and under the rail tracks is the lively Gadoshita area which is packed with cheap diners and drinking venues.

Attractions close to Tokyo Station include the gardens of the Imperial Palace, and Mitsubishi Ichigokan Museum. The museum is housed in a Queen Anne style building designed by Josiah Conder and exhibits mainly 19th century European art. Outside the western Marunouchi Exit of Tokyo Station you can view its original red brick façade which dates from 1914. The eastern Yaesu Exit of the Tokyo Station building is more contemporary in appearance and opens onto the Tokyo Station City shopping and dining complex.

The Akihabara district is world-famous for its cheap electronics stores, as well as shops catering to “otaku” culture with manga, anime, games, and cosplay goods. Here you can also find maid cafes where customers are served by girls in French maid costumes.

Exit here for the southern entrance to Ameya-Yokocho: a busy street market with a huge variety of cheap eateries and bargain stores.

Ueno is a popular sightseeing location with many cultural facilities and historical sights contained inside Ueno Park. Highlights include the world-class art collections of Tokyo National Museum and the National Museum of Western Art, the amazing displays of technology and natural history at the National Museum of Nature & Science and the giant pandas of Ueno Zoo. The northern entrance to Ameya-Yokocho street market can also be accessed here.

This station is convenient for the traditional shopping street of Yanaka Ginza, the popular cherry blossom viewing spot of Yanaka Cemetery, and Tennoji Temple which was founded 1274 and features a large bronze statue of the Buddha which dates from 1690.

Transfer at Nippori Station to JR East’s Yamanote Line and Joban Line, the Keisei Main Line, and the Nippori-Toneri Liner.

In the early 20th century, Tabata was home to a community of celebrated artists, novelists and poets. Among these the writer Akutagawa Ryunosuke was probably the most famous and so he was nicknamed “the king of Tabata”. Today this history is celebrated at the Tabata Memorial Museum of Writers and Artists which holds 3,000 objects including paintings, ceramics, letters and original manuscripts. Admission is free and the museum is a 2 minute walk from Tabata Station.

Exit here for Kyu-Furukawa Gardens, a Western style manor house built in 1917 which is surrounded by park land. The gardens include a rose garden, a rhododendron garden, and a traditional Japanese stroll garden and pond.

Just outside Oji Station is Asukayama Park which is known for its springtime cherry blossoms. Inside the park are three museums. The Paper Museum has exhibits related to 2,000 years of paper history including traditional Japanese washi paper, the development of industrial paper manufacturing, paper recycling and associated environmental matters. The Shibusawa Memorial Museum is dedicated to the Meiji era industrialist Shibusawa Eiichi. The Asukayama Museum is dedicated to local art, culture and history. Also in the park are two preserved railway vehicles: a D51 steam locomotive which was retired in 1972 and an old Toden Arakawa Line tram car which was retired in 1978.

Exit here for the park and botanical garden at Kawaguchi Green Center, and the Former Tanaka Family Residence: a Taisho era red-brick building which features an interesting blend of Japanese and Western styles of architecture.

Exit here for the Museum of Modern Art, Saitama (MOMAS). Loctaed in Kita-Urawa Park, MOMAS was designed by the Metabolist architect Kisho Kurokawa and it exhibits works by leading international and Japanese artists.

Exit here for Saitama Super Arena, which is a popular venue for sporting and musical events.

Omiya’s attractions include Hikawa Shrine (which is believed to be 2,400 years old), Omiya Railway Museum, Omiya Bonsai Village, the Japan Mint Museum, and Saitama Prefectural Museum of History and Folklore.